Clint Eastwood's 1993 movie is pretty uneven, very Bollywoody, and rough in execution. The right intent but well, isn't the world full of them. So we have an escaped convict who is basically good at heart (Kevin Costner does not look like a criminal) and one nasty criminal. They bump off a couple of people (rather the other guy does). Kevin is a good guy who saves a lady from getting raped by the bad criminal and somehow ends up taking her son young hostage. Now the young son is the bad criminal's next target so Costner kills him. 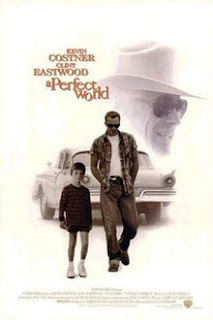 The rest of the movie goes on about how Costner teaches the young kid to live his life, go for his dreams etc. They are being chased by a sheriff (Eastwood) who has little to do, one good looking psychotherapist and a trigger happy FBI chap (who propositions her when the movie is flagging). Ends up in a mess with the kid shooting Costner and with a Bollywood style ending where the FBI chap shoots him off even as he is told not to.

It is not a perfect world with movies like these. Too many contrived situations and movie-like stuff - like the sheriff having a past with Costner and wanting to seek redemption. Too filmy, too many angles, too little story.
Posted by Harimohan at 9:57 PM