I loved the film. It deals with India's reality than most films. It does not divide castes in black and white but shows them like it is, castes and communities live together and interchangeably so in the work they do, but in the end the power equation remains the same. But it is so subtly done and never shows up as an issue between the two friends - Krishnan and Ganga. 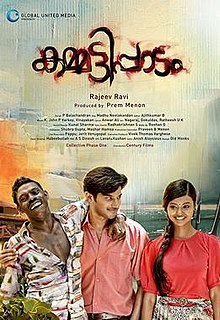 Ganga is a dalit and Krishnan a high caste boy. But they are close friends, with Ganga the leader and Krishnan his ally. Ganga is exposed to a violent life, and has to fight to survive; his family is trying to make a living and survive. Krishnan is exposed to the same. They see Ganga's older brother, the violent and crazy Balan, who will not be cowed down and who hopes to make his own mark by asserting his position and not by asking for permission. Then there is Ganga's cousin whom Krishnan likes too.

As they grow older Krishnan is drawn into Ganga's life of crime, one which Balan leads. There is pride for the Kammatipadam boys, of all castes and communities, who fight and assert their rights at the black market in cinema theatres, with liquor smuggling and there is money and self respect and adrenalin. Ganga is a key member of the gang and it is but natural that Krishnan is where Ganga is. Their friendship is beautifully shown and it is clear that Krishnan will not tolerate anything done to Ganga. They make such a contrast too - the suave and good looking upper caste boy and the buck toothed dark, wild eyed Ganga. One day when Ganga is on the verge of being caught by the police  Krishnan thinks nothing of stabbing the cop and going to a correctional facility. That marks the beginning of a hardened Krishnan

Balan is forced to evict other dalits to make land for big complexes and you can see how the real estate ogre slowly consumes the poor and the backward and how the dalits are pitted against the dalits. Balan's grandfather dies of the shame and heartbreak of knowing that his grandson has evicted his own people and made them homeless. Balan loses heart and wishes to settle down to a straight life - he is also getting tired of constantly having to cope with Johnny, a rival. Krishnan urges Balan to turn straight and they dream of a life as travel agents. Krishnan even buys a tourist traveller.

Balan is killed in what appears to be an accident. Ganga believes Krishnan let his brother down because he was with him when he was killed. There is also the case of the girl - Krishnan likes her and she him - but Ganga stakes claim to her saying that their families would not agree to their marriage anyway. The friends part and Krishnan starts his agency.

When the gang hires him for a job Krishnan goes reluctantly and ends up saving Ganga again. Also helps him take revenge on Johnny but Johnny survives and swears revenge on them. Ganga disappears and Krishnan is caught by the cops but reveals nothing. With Balan dead and the gang in disarray Krishnan goes to Mumbai and settles down there as a security guard.

And then he gets a call from Ganga one night - a short call when Ganga tells him that someone is after him and he fears fro his life, that he is sorry about marrying Krishnan's love and that he hoped everything will be alright soon. Krishnan hears a whooshing sound and a crack, a ring tone of a mobile and then a few more whooshing sounds. Ganga's voice goes quiet.

Krishnan comes searching for Ganga who he believes is in danger. His search takes him to his old enemies Johnny and he ends up being stabbed by Johnny's brother though he annihilates the gang. He finally comes to their big chief, the man who controlled the liquor business and then the real estate business, the one responsible for Balan's bad ways and loss of land for dalits and in a moment of clarity realises whose ring tone it was that played on Ganga's phone and the swoosh of a golf club that is in the big boss's home. Krishnan kicks him out of the top floor of the apartment on a land built on the blood of the poor people of Kammatipaadam.

It moves at its own pace. The friendship of Krishnan and Ganga is so real, just as their destinies are. It is not so much the journey as the end. Salman as Krishnan, Vinayakan as Ganga and Manikandan Achari as Balan are outstanding.
Posted by Harimohan at 11:25 PM