The Road to Perdition - Movie Review

Again a movie that has been on the list for too long. Nicely made and full of drama. Father-son duos pitted against one another. Now one of the father's (Tom Hanks) is almost like a son to the other father (Paul Newman) and is fiercely loyal and you have tonnes of conflict. Who chooses to do what and how do they achieve their end? 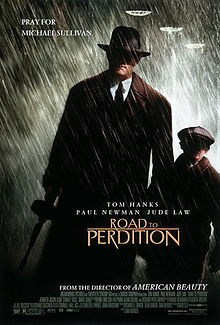 Michael Sullivan (Tom Hanks) is a hit man for a mafia boss Rooney (Paul Newman) whom he loves like his father. The boss's son Connor (Daniel Craig) is unhinged, lying, deceitful and cruel. He kills a man whom he is sent to negotiate with - a crime that Michael's son sees. Sensing danger Connor kills off Michael's wife and his other son, thinking that he killed off the son who witnessed his crime. But he really needs no witness because Michael escapes being killed by Connor's plant and decides to take revenge. His godfather Rooney decides to support his son and offers peace to Michael who says he needs to kill the man who killed his family. Rooney, fearing for his son's life, sends out a hit man to eliminate the dangerous Michael but Michael evades him, injures him and gets his revenge.

The movie is shot beautifully and earned cinematographer Conrad Hall a posthumous Academy Award. One of those movies where the images will always remain. The killing of Paul Newman and his men in the rain, the scene where Hanks is dying lit in brilliant white and a dazzling red, every frame is perfect. The story is powerful enough with superb conflict and drama throughout and grips you. Fantastic acting by Paul Newman, Tom Hanks and Jude Law. To watch if you haven't.
Posted by Harimohan at 5:05 PM