Everything You Wanted To Know About Sex, But Were Afraid To Ask - Movie Review

Made in 1972, the movie is based on Dr. David Reuben's book of the same name which was a one-time best seller in America. It was Woody Allen's fourth film and a big hit. 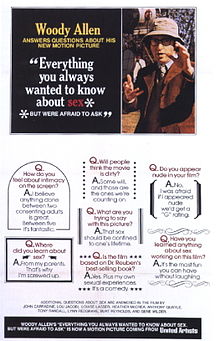 The movie comes in chapters apparently as they were in David Reuben's book. We don't know how much the book influenced Allen's thinking on the subject but we can see that he has some original ideas on it and cannot wait to share the same.

In the first chapter titled 'Do aphrodisiacs work?' Woody is the court fool who seduces the queen by giving her an aphrodisiac. The aphrodisiac works but the canny king has put a chastity belt which is almost impossible to open. Woody succeeds but the King catches up with him.

In 'What is sodomy?' Gene Wilder is the doctor who gets an intriguing case of an Armenian Milo who loves his sheep Daisy. The doctor also falls in love with Daisy and arranges secret rendezvous with her in hotel rooms, buys her jewelry etc. He is caught cheating by his wife, loses everything including his license. Daisy also leave shim.

In 'Why do some women have trouble reaching an orgasm?' Woody comes in as an Italian and finds that his wife or partner can only achieve orgasms in public places.

In 'Are transvestites homosexuals?' we find that there is a respectable man who has this passion for wearing women's clothes. But he is not a homosexual I think.

In What are sex perverts?' we find a show called 'What's your perversion?' where people try to guess people's perversion. Also an old rabbi gets treated to his perversion of being beaten up.

In 'Are the findings of doctors and clinics accurate?' we find a crazy doctor researching on sex and subjecting his unwilling specimens to all kinds of experiments. When one of the experiments goes wrong a huge breast escapes and chases people in the countryside. The state is rescued by Woody who traps it in a bra.

In 'What happens during ejaculation?' we find that the many parts within our body - the eyes, the brain, the ears, the sperm, the blood, the penis undergo so many complex and well coordinated moves to ejaculate. Its like launching a spacecraft mission.

Fun but not funny as with some others. But you get the general idea. Woody is in his element.
Posted by Harimohan at 12:30 PM