Watched 'Ray' a 2004 film based on the life of the famous R&B artiste Ray Charles Robinson. Jamie Foxx played the lead role of the blind, temperamental and highly talented musician who comes from a povery stricken conditions on a plantation in Florida and makes a name for himself in the music industry. This was in a time when racial segregation was very much in vogue. Jamie Foxx played the lead role and he played it wonderfully well and got himself an Academy Award for that performance. 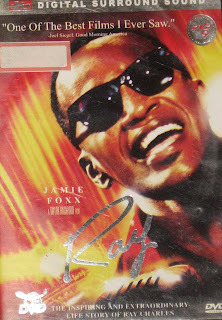 The movie starts with Ray Charles Robinson standing at a bus stop in Florida. he wants to go to Seattle to play music. The movie keeps cutting back to his highly impoverished childhood of a six year old Ray and his younger brother George with their mother on a plantation with other black families. Ray learns to play the piano thanks to an old man who plays at the pub. Life is hard, there is no father around, the mother is very principled and never lets anyone, even life dictate its terms to her. And this is the greatest lesson she teaches Ray, that there is no place for self pity, a lesson that Ray learns very fast. In an unfortunate incident, his younger brother George dies as he drowns in a vat of hot water right in front of Ray's eyes. Ray holds himself guilty for his younger brother's death and in a seemingly related fashion, stops himself from seeing the world, the pain, and goes blind. But under his mother's pitiless, yet loving care, he learns how to take care of himself, gets some education and figures out that his talent lies in music. He also knows how to get by as he lies to the white bus driver that he has earned his bus trip because he lost his eyes fighting in the World War!

In Seattle the singer meets Quincy Jones among others, makes his talent speak for himself and more importantly makes it clear that he is a hard nosed businessman who is not going to take any nonsense from anyone. The moment he realises he is getting shortchanged he quits the safety and comfort of the job where he is playing and walks out. He plays in an all white band and realises that the Manager was cheating him - after which he asks all payment in singles - so he can count individual dollars. He also has a charm that draws women in flocks to him and he has a series of women on the tour. Ray gets married, makes money but is haunted all the time by his brother's death and visions of his childhood. To escape the pain he turns to drugs and a series of relationships that threaten his marriage. He gets arrested and gets away until one day he finally decides to quit heroin, gets into a rehab and fights the addiction out of the system. Ray never goes back to drugs and makes some wonderful music for many years to come until his death in 2004.

One thing stands out in the story is Ray's commitment to his music all through. Even as all others around him are falling to drugs or alcohol, he somehow finds time and energy on keep on playing, practicing and creating new forms of music. When his wife tells him on the day he decides to give up heroin that his drug addiction will take away the one thing that is closest to him - his music - Ray realises that it is not worth losing his music, the one thing that kept him alive. His love, commitment and passion for music is phenomenal. Another aspect that comes across is his business side. He is uncannily clear headed in business, ruthlessly changing sides, changing contracts with never heard of clauses, all with a 'country dumb' attitude he perfects and is soon known for. Somewhere as he overcomes his addiction he also makes peace with the fact that his mother and brother have forgiven him and he goes back to his music. Apart from being a leading figure in the fight for more rights for artistes, Ray also challenged the segregation of races in his audiences as was in vogue then, at the cost of losing his fame and money. The movie is full of his hit numbers and some of the songs were familiar but I instantly connected to 'Get on the road Jack' which I had heard in the eighties.

Jamie Foxx is brilliant as he changes the way he speaks, the way he walks to play the role of Ray. Apart from being blind Ray was also a highly strung, intelligent and passionate man who has to ooze charm, hide his drug addiction, play 'country dumb', show a ruthless side and also a vulnerable and lonely side. Complex as it can get and Jamie Foxx lives it. It was highly disturbing to see the scenes where young Ray loses his brother and his vision and then his mother as she sends him away to get an education. Those scenes have been shot powerfully and explain the full impact of those years on Ray, the pain he and his mother carried. I cannot see myself watching this intense movie again in the near future, but for those who have not seen it, Ray is a must watch.
Posted by Harimohan at 8:09 AM