'Fireworks Wednesday' is an Iranian film released in 2006. It is about three relationships, two married and one to-be-married, and dealt with during the course of one day, the Persian New Years Day. 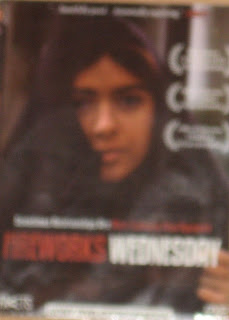 Rouhi a young girl is about to be married to her fiance. They are poor and live far from the city. Rouhi takes up a job as a cleaning woman to earn some money for her marriage and lands up at the house of a young, urban, rich couple with a little son, Mojdeh and Morteza. They have obviously had a fight as Morteza has a broken window, a bandaged hand and the place is in a mess. His wife is not home when Rouhi arrives and he asks her to get started.

When the wife comes, she fires the girl and tells her to go away, paying her handsomely to go away. But by now Rouhi has heard enough to realise that there is some trouble in the marriage, that Mojdeh is suspicious of the neighbour's involvement with her husband, and Morteza is trying to prove his innocence. Mojdeh changes her mind about firing the young girl because her help does not turn up and instead sends her to the beauty salon run by a recent divorcee who is pretty and who she thinks is having an affair with her husband.

When Rouhi goes to the salon, the beautician Simin, gives her a free treatment, and makes her look beautiful for her wedding. While she is there Rouhi realises that Simin is being thrown out of her place by the landlord. Rouhi goes back to Mojdeh's house where Mojdeh's sister has arrived. To do her new friend Simin a favour, Rouhi tells Mojdeh something that scuttles all her suspicions (something about tickets which Mojdeh suspects Mroteza and Simin to have planned). Morteza is much relieved at Mojdeh's cooling off, and offers to drive Rouhi to her house after the firework display for his son. He slips off for a while leaving Rouhi with his son. When he gets back and drives Rouhi home, the young girl realises that the car has Simin's perfume which she had tried out that afternoon. Simin has just broken off her relationship with Morteza. Morteza drops off Rouhi (who tries to tell Mojdeh the truth, but has no opportunity). Rouhi heads home with her devoted fiance who is waiting for her despite the fact that it is very late. And so all the relationships go back to another day, some with hope, some ended, some starting afresh.

'Fireworks Wednesday' as with all other Iranian movies keeps you wondering what will happen next - without all the excessive drama the much lesser film makers resort to - I wonder how they do it. Its pretty much the flats, four women, two men and that is what keeps it going. The pace is slow and purposeful as the story unfolds, but never boring. The acting is sublime, all actors are so good that you almost feel like you are peering into someone's house as this is unfolding. The last scene when Morteza drives home Rouhi on the fireworks night when he has to pass through celebratory fireworks is terrifying - if it were not for the calm faces of both Morteza and Rouhi - you'd think they'd get mugged or mobbed. Another fine piece of work by the Iranian movie makers - this one directed by Asghar Farhadi.
Posted by Harimohan at 10:29 PM