Samira Makhmalbaf, daughter of Mohsen Makhmalbaf, (then 20) directed this movie about Kurdish refugees. It was released in 2000 and won Samira several awards. 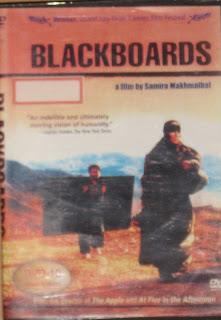 The movie begins with a sight that really intrigued me. A group of ten men walking with huge blackboards on their backs, slowly making their way up the hills, hiding from hovering helicopters, camouflaging their blackboards with mud. As they talk we find that they are traveling teachers in search of work in villages on the Iran-Iraq border. They are not able to find pupils and hawk their services in every village by walking up to anyone trying to teach them multiplication tables, reading and writing. We follow two of them mainly - one who splits and joins a group of old men looking to go back to their homeland across the border, another who runs into a group of young boys smuggling contraband strapped to their backs across the border.

The first teacher who finds the group of old men tries to teach them, finds no takers, asks for any work for a piece of bread and takes up the job of leading the group of Kurdish refugees to the border for a price of 40 walnuts. There is only one woman in the group with a small son and he marries her, giving away his blackboard in dowry. He tries to teach his wife to read and write, writing 'I love you' so she can say it. He finally helps them over the border where the wife decides to move on with the group to her homeland and the teacher returns to his, minus the blackboard, which his wife takes away with her - the 'I love you' showing prominently on it as she fades off. They are divorced as simply as they got married.

The other teacher finds the group of young children, none more than 14 years, as they hide from soldiers and patrols, scurry along with sheep, heavy contraband on their back. The teacher thinks he has hit a jackpot at seeing so much children of the age and attaches himself to them. They are however not interested in learning anything. Save one young boy Reeboir who shows interest. As they walk on, the teacher walks ahead saying lessons for the young student to repeat, writing words on the blackboard that the boy can see while they walk. When one of the boys falls down the steep hillside the blackboard is chopped up to make a splint, and only one third remains. Reeboir is a good student and learns well, even writing his name on the blackboard. When he proudly shows his achievement to his teacher, young Reeboir is shot by a stray bullet and the rest of the group runs away.

'Blackboards' opened up something about cultures that I could never have imagined. Traveling teachers with blackboards, small children smuggling stuff, old refugees seeking their homeland are all new. The use of the blackboards for something other than teaching, their fight for survival and their keen desire to teach, to earn a living, all shows up hopelessly in the background of war where chemical weapons are used. Reeboir's death and the divorce of Said (the other teacher) bring back the movie to what can only be a human story, and not a happy ending. Blackboards is poignant and deeply depressing but makes its point powerfully.

Posted by Harimohan at 6:20 AM