'The Hidden Half' is directed by the famous Iranian woman director Tamineh Milani - known for her strong woman-centric movies. She was imprisoned for making 'Hidden Half' which was considered anti-revolutionary by the government. But worldwide backlash by famous directors including Coppola and Scorcese pressurised the Irani government to release her in two weeks. She is back to making movies. She is a trained architect. 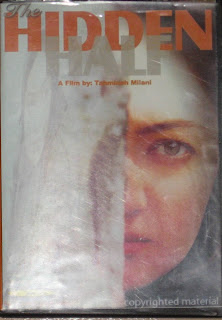 The movie begins with a high ranking government official preparing to go out of town the next morning to verify facts about a woman political prisoner who is awaiting execution. The official is rather dismissive of what his visit would find. Seeing his preset attitude, his wife Ferestey, tells him to be open. to listen to the woman. The official is surprised at her anguish and thinks that she is reacting so, because she knows nothing of the world outside, being brought up to be pure and innocent.

When he reaches his destination, the official opens his suitcase to find a letter from his wife and a notebook. She tells him that he does not know of her hidden life, and that after reading her unknown story, he should, if he believes in her story, listen to the woman prisoner. Fereshtey then tells her story of the days before the Islamic revolution, when she was a leftist student who was actively involved in propagating the thought of her group in a still conservative country. During the course of her stay in the University she meets an elderly man, an editor of a magazine and falls in love with him. But her group members are arrested and she has to flee. Her editor friend tells her to leave for England and asks her to get her certificates from home soon so he could help her out of the country.

On her return she finds that he is a married man who has a daughter as old as she is. She meets his wife who is helpful and who gives her a place to stay, as Fereshtey is expelled from the University. Fereshtey finds a job with help from the wife and gets on with her life, meeting her husband along the way. She however realises that her editor friend really was fond of her as she reminded him of his first love who died. When she meets the editor friend many years later at a funeral he tells her that she never heard his part of the story.

The husband is stunned as he reads his wife's hidden story. When he meets the prisoner the next day, he listens to her story and you know that justice would be done.

The 'Hidden Half' brilliantly captures the mood of Iran's society, especially of the women who lived in that era. I can identify with the country so much more as I see its movies as it appears so much like India in the way it lives, the traffic etc. Of course we had Irani students in our Engineering college, we bump into the Parsi friends of ours which makes Iran so much more familiar. Nothing seems different - for the Iranian women they had their own social norms that bound them, just as India also has a society that one way or another imposed curbs on women from being themselves.

Again, an honest glimpse into Iran from yet another movie of high quality, as the director scans through the period, the characters, their hopes and aspirations, their fears, in the course of that one night when the official reads his wife's notebook. Again, one wonders, why such movies cannot be made in India, where no period of a crises, political or social, has been properly covered. In the current scheme of things obviously everyone would ban such movies here I guess!

I've seen this movie and I loved it. :)
I am reminded of that scene when the wife meets that man again and they walk away from each other. I saw it in the iranian culture centre in delhi in a library filled with books.

Hi Jasmine,
I loved it too, as I do all these Irani movies that I am getting to see these days. Fantastic stuff! How do they make movies like that?