'Close Up' is an extraordinary film and one that only Iranian film makers could have made. It is a movie about a real life incident when a young, unemployed film buff impersonated the famous Irani movie director Mohsen Makmalbaf and was caught for fraud. The movie reconstructs the events of the story. 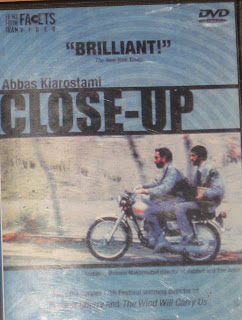 The movie starts with a journalist going to the house where the impostor, Hossein Sabizian is, with the police. He has come to know that there is a man claiming to be Mohsen Makmalbaf who has gained access to the Akankhah family and who has offered the wealthy man's son Mehrdad, a role in his next film if they financed it. He is visiting them frequently and has also started rehearsals. Though he has not taken any money from them, something about him makes the wealthy father suspicious and he tells a friend that perhaps under the guise of shooting a film, this man was checking out his house for a burglary. The friend contacts his journalist friend who knows how Mohsen Makmalbaf looks so he arrives, gets the impostor arrested and clicks pictures and hits the headlines the next day.

In court the impostor says he never intended to cheat anyone. He wanted to really create something, to experience how it felt to be Mohsen Makmalkbaf. He says that it is his reality and he enjoyed playing the part as an aspiring actor, as someone who loved arts. He says he never meant any harm and all he wanted was to enact his part of Mohsen Makmalbaf to the best he could to satisfy his creative urge. It is audacious, as the impostor says exactly what he seems to think went on in his mind then. His mother comes and pleads for his release. He himself pleads for his release. The judge asks the wealthy family to be forgiving and accept the impostor's apology in view of the fact that he has a young family, has not committed any grave crime except impersonating someone and that he is already penitent. The family agrees after some reluctance and withdraws the charges.

Later Mohsen Makmalbaf arrives on his motorcycle and meets his impostor who begs forgiveness again. He then takes him along to the house of the wealthy businessman, asks them to forgive him, and says that his impostor Sabizian is now going to act his role in this movie 'Close Up'.

Everyone played his own role in this movie, including Mohsen Makmalbaf, the impostor, the businessman, the son etc. Used as I was to our endings here, I expected that the impostor is actually Mohsen Makmalbaf, going by his evasive and philosophical replies in the court (which also irritate the son of the wealthy man who thinks its all fake). But trust the Irani films - he stays on course and ends the movie on that note, that the movie is about to be shot on that incident. Apparently another director made a short film called 'Opening Day of Close Up' on a theatre owner as he is about to show this movie in his cinema.

One thing with Irani movies - they always make you drop your jaw and say 'How can they make movies like this?'
Posted by Harimohan at 10:53 PM