Baba Ram Dass was Dr Richard Alpert PhD, a full blown scholar teaching at the University of California, Berkeley, Stanford, Harvard, Yale and living the good life when he decided to explore greater levels of consciousness through psychedelic drugs. Unfortunately he found that the high would always go away and he would come down. In search of a permanent high he came to India with a bottle of LSD driving with a friend through Tehran, Afghanistan and finally landed up in India where he met Baba Bhagwan Das. With almost no mention he speaks of Neem Karoli Baba who is his guru. The transformation from Richard Alpert to Baba Ram Dass happened while he was here and he took the message to the world from the West after he returned. Neem Karoli Baba is known as the miracle Baba and his biggest known disciple (actually not because he came to India after Baba passed away) was Steve Jobs. 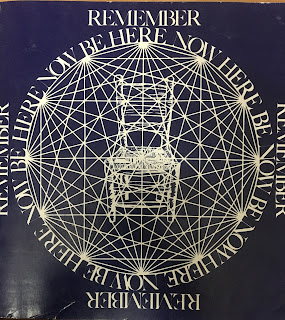 Anyway, its a fascinating book produced by the Hanuman Foundation. It has an introduction to Richard Alpert's story and how he became Baba Ram Dass and then follow 108 pages (no secret) with messages, thoughts, drawings, almost like a child's personal sketch book. It has I should think the essence of the messages Ram Dass wanted to convey. This part looks like he was in his psychedelic state, free of convention or rules. 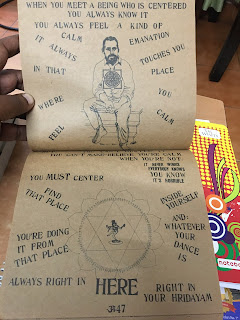 After the brown pages end, starts more organised writing, and he writes in short the cook book for a sacred life. Sleep (go early to bed and wake up early, sleep on a hard surface, small or no pillow, on your back or on the left side, meditate before you sleep), eating (keep stomach empty, do not over eat, half full of food, one quarter water and one quarter air, easily digestible food, no food coming from violence), study (from those who know), Asanas (he drew some fine pictures of the yoga asanas), mantra (to keep thoughts off your mind, Tat Twam Asi), pranayam, sexual energy (brahmacharya or abstinence or tantra), satsang, Being the witness, Bhakti yoga, Money and rightful living, Dance, Meditation, Rational Mind, Time, Psychedelics as a way to achieve higher states (pros and cons), course of Sadhana, The Zen Center, Family Sadhana and Dying, How to practice dying.

Its a fascinating book and its quite interesting that I had only briefly heard of the miracle baba when M Dhoni visited his ashram before the 2011 World Cup. There was talk about Steve Jobs then. Then in January this year, quite fortuitously, I went to Neem Karoli Baba's ashram thanks to Ranjan on our trip to Nainital. Sagar keeps talking about him and the other day when I was getting the house painted, I visited Rajesh's factory and found a huge picture of Neem Karoli Baba in his office. I asked him how and he said his son Abhishek, a mature, interesting and evolved young boy who reads eclectic stuff, had been visiting Neem Karoli Baba's ashram for the past few years. When I met Abhishek he gave me this book and I read it. Its fascinating.

Thanks Abhishek for lending me the book.

Posted by Harimohan at 9:45 PM