The Home and the World - Rabindranath Tagore

I watched Satyajit Ray's 'Ghare Baire' which is adapted from this story and was so impressed by it that I remember it scene by scene. Now when I read Tagore's 1916 novel, it's even more fascinating for me that he could write about a world so clearly, and how it remains as relevant today as it was then. In fact the present regime so much fits into Sandip's narrative of making the nation into a Goddess, of a particular brand of swadeshi and how the whole idea is twisted to suit some people's agendas. And it's so uncanny - there are even Mussalmans who are upsetting the swadeshi characters. Uncanny. 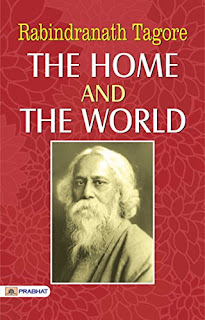 So we have Nikhil, a Maharaja with progressive views, his wife Bimala to whom he gives a lot of freedom, his activist friend Sandip from college who is all fire and brimstone, poetry and passion - and quite a bit of manipulation. The story is told from the viewpoints of these three protagonists and we understand their motivations and dilemmas - Nikhil is true to his values and tries to keep the balance and sanity, Bimala is misled and carried away by the drama and passion of Sandip's revolution and Sandip uses his glib tongue to fool Bimala and a whole bunch of gullible youth and has his own plans of making the most of the revolution. Sandip's demands of Bimala for money, Bimala's being forced into giving it to him and all that follows later ends with innocent and noble blood flowing while Sandip escapes having lit the fire. The fiery and glib orators who have an agenda, the gullible voters and the helpless cause of the right-thinking are all out there to see even today.

Loved reading this story. And now to read 'Gora'.

Posted by Harimohan at 9:13 PM