Robert Slater is the author of another best selling book on Welch titled '31 Leadership Lessons from GE's Jack Welch.' The book covers many aspects of Welch and how he grew GE and there are several nice insights into how he went about things. 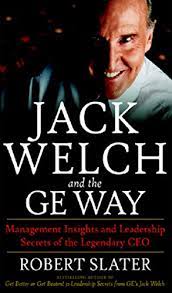 For instance, when he joined as CEO of GE which was then a healthy company he did not sit comfortably - instead he saw trouble and went about making corrections to anticipate the future and be ready for it. Among the many things he believed in was the power of having the right kind of people - he spent time figuring out what kind of people were good for him and kept them and removed the others. He wanted people with energy and the kind of energy that would re-energise others. He wanted leaders and not managers. He wanted people who got everyone to contribute and who would make GE a learning organisation that learned from everyone. He was for speed and flexibility and not for rigidity and beaurocracy. He wanted people with integrity because then he need not police people - they would do it themselves - and he would not hesitate to fire them if they did not match up on their value system.

Welch believed business is simple - don't overcomplicate it. He was not interested in the past and more interested In current reality because that would help him take the hard decisions like downsizing or restructuring so they would retain their No 1 or No 2 spot. Welch was all for change and would advocate that the people he wanted were those who embraced change and not those who feared it. he differentiated between managers and leaders - leaders are those who inspired and grew people. The way to lead is to ask the right questions, create a vision and make your team buy-in and then get out of the way. Of course, he tells them to cultivate managers who share their vision. One line I loved was that to engender enthusiasm you must allow employees far more freedom and responsibility. Facilitate, not control. Welch categorised managers as ABC - keep As' work on Bs and get rid of Cs.

He says leading comes down to facing reality and acting decisively and swiftly on it. He made all GE employees carry a values card so they are fully conversant with them. Those who weren't were removed. Values were - Integrity, passion for excellence, being open to ideas from anywhere, live quality and gain a competitive advantage, have the self-confidence to involve everyone, behave in a boundaryless fashion, bring in energy, view change as an opportunity not as a threat, build global teams.

Some of the ideas he pitched for passionately showed that he lived his talk - to change people's minds, be consistent - communicate, communicate. He practised boundarylessness as far as getting ideas, breaking down barriers between divisions, people, he drove a program called Work-out which involved everyone in giving ideas in a structured manner, he introduced Stretch to go for massive goals, he brought in quality as a factor of competitive advantage, he wanted a learning organisation and pitched for it. It may all seem very common sense like but he was good at that.

Welch focussed on vision and not numbers. He always looked for quantum leaps - surprise, boldness and shock were his weapons for that. Speed was big for him - if he found a problem his approach was to fix, close or sell - fast. He believed speed decreases control. He wanted the organisation to be lean, agile and fast like a small company. To him, only three parameters really mattered - employee satisfaction, customer satisfaction and cash flow. He wanted to get rid of anything that got in the way of being informal. To harness people he would harp on speed, simplicity and self-confidence (which he believed was the opposite of bureaucracy). Quality to him was also a product of speed, the next step to the learning process gets rid of fat, the next act of productivity. To foster the learning culture he established the Management Institute which is known as the Harvard of Corporate America. One other big lesson I learned from him - celebrate all progress. Find ways to celebrate he says. Gives an incentive to progress some more.

Lots of good takeaways (another Welch term). Though I felt it could have been presented better. The many quotes of Welch actually distract us because we are keener to know what the author is saying, not just quoting Welch. That said, the way it is structured, the headings of each chapter which is the lesson and a key principle makes it a nice and easy read with plenty to learn for any aspiring leader - corporate or otherwise.