Vasu likes Phirni. So do I. So the last two times we went to Sarvi for a meal he asked the waiter for a Phirni. Both times it was a negative. This time however Vasu remembered that there was a new place called 'Meethe Miya' near Meridian School. So we headed off to find the place. 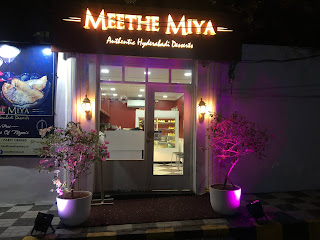 It was the quaintest of stores. Apparently has been around for three years. Specialises in authentic Hyderabadi desserts. From the royal kitchens of the Nizams it says.

All of them mouthwatering. We ordered Phirni which was served in a clay bowl and thoroughly enjoyed eating. I have many plans for this place.

Posted by Harimohan at 7:33 PM