Prakash has a sea of stories from his eventful life. While chatting with him the other day, came this one. A young Prakash and his partner Zubair, in their early days as architects, met this wealthy educationist and philanthropist, who made it entirely on his own. Prakash described the incident. 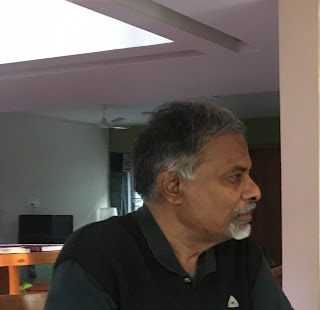 'So we were to travel with him to his hometown in his car. It was a Mercedes Benz and we got in. I was naive and innocent, steeped in middle class values so I asked him the first question that comes to our mind. How much mileage does this car give?'

The gentleman did not reply to the question on mileage but said something else which gave an insight into abundant thinking.

'Íf we have to think about mileage etc it is better not to buy a Mercedes,' he advised. 'If we are thinking in terms of filling in only a small amount of petrol, few points in a bike, few litres in a car, your thinking is wrong. If you want to be wealthy, think wealthy. Fill up the tank always. Tank full.'

Two wonderful tips saying the same thing. Abundance is a state of mind. Fill your tank with petrol. Keep enough cash in your pocket that makes you feel abundant. Fill your heart with faith. Don't think scarcity or lack thoughts like how much mileage etc. A Mercedes is not about mileage. Life is not about mileage, about being fearful that things will run out. About clinging. Life will provide abundantly if you venture. Which is why we call them entrepreneurs, those with enterprise.

Another interesting aside of the same story is about the gentleman's driver who would speed up over 100 kmph when the road was good. The gentleman cautioned him not to go past 100 kmph twice. The third time he told him he would get him off the car if he repeated his mistake. Sure enough, the fourth time, in the middle of nowhere, he asked the driver to alight and took the wheel. The driver took five hours to get to the destination.

Prakash was recollecting the days of his first home and his Bajaj m50, the bittersweet difficulties of the early days that he and Gauri had to face. Today he holds his possessions easily and comfortably and says with a twinkle in his eye about how most of us are fed the wrong beliefs about money and the difficulties it brings.

'It is not a bad thing to be wealthy,' he said.

It is a state of mind. To allow it, to receive it, to hold it, to be it, to let it be and to be. Nice story Prakash. Keep your tank full. Thanks.

Posted by Harimohan at 2:31 PM

Did the driver made it to where they were going and was he allowed to drive them back?

He did, after five hours. And he was allowed to drive them back, having learnt his lesson hopefully. :)