Of Closures and New Beginnings - Saniya

This is an English translation of the works of award-winning Marathi writer Saniya, translated by Keerti Ramachandra, one of the better-known translators today, especially from Marathi and Kannada to English. 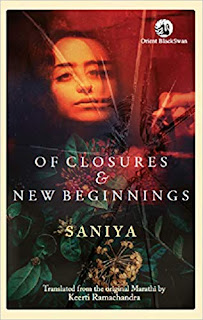 The book contains five stories and a novella. In the first story, 'A Matter of Choice' a widow who chooses to live by herself finds an old college friend landing up at her house with his young daughter who is running a fever. She slowly realises that he is broke, has left his wife and home and is on his own. Gradually he reveals his state of affairs to an increasingly irritated widow and proposes to her - that he could pretty much manage the house if she let him be his caretaker wife.  A marriage of convenience and a complete role reversal.

In 'Bequest' a married woman meets an old college friend, an idealist perhaps who is foraying into politics. He comes to meet her and her husband and during the course of the day we realise that he deeply cares about her in the small things that he remembers or does for her. At the end it appears that they both realise the futility of what-could-have- been-but-is-not.

In 'Bhumika' we have another happily single woman who suddenly has to deal with pressure from her family to marry a recently widowed friend of hers and mother his child. She is clear that she does not want that role but they don't seem to understand.

In 'Love Gene' a daughter visits a father on his birthday. She grew up without any real attachment to her father who has always remained distant from her - only now that he has grown old he does not know how to deal with the vacuousness of his life, his daughter's affection, something he cannot reciprocate.

In 'The Invitation' a working woman visits her daughter and her estranged husband in the USA on her daughter's invitation and finds that perhaps the reasons for her estrangement are not her husband's fault as she always believed it to be. She understands her new role and her husband's positives and by the end has enough grace to invite him back.

In the novella 'Another Chance' the protagonist Suruchi is dealing with the sudden death of her live-in partner Shreerang when her parents and her younger sister come to visit her in India. Her younger sister Swaroop stays back and gets married while Suruchi remains single, content with her memories of Shreerang.

The themes evoke an urban setting, of old college friends who come back, of middle class people trying to challenge the traditional boundaries that middle class people bind themselves with. So a relationship, a choice to remain unmarried, an unconventional proposal, a choice to separate but still be ok with the idea of that relationship - everything adds up to a lot of tension and conflict. It might not seem like much, but these are the conflicts people face, and live and die by them. The stories offer interesting perspectives or what-ifs and one gets a look into the deeper desires and wants of women and how much pressure is exerted on them by society and by themselves. A unique bunch of stories. Somehow left me with a Basu Chatterjee- Hrikiskesh Mukherjee movie feel to the whole thing which is to say I might not forget the stories or more importantly the feel of the stories that seems to wrap itself around me. Credit to Saniya for creating that special space for the reader and Keerti Ramchandra for capturing and retaining it. .
Posted by Harimohan at 10:25 PM