This is an updated edition and the first thing I noticed is that Dr. Dweck decided to change the tag line to 'Changing the way you think to fulfill your potential'. The earlier one was more on the lines of success - something that her editor forced on her I think. The book is structured the same way - The two mindsets, ability and accomplishment, sports and the champion mindset, mindset in business - leadership, mindset in relationships - love etc, parents, teachers and coaches and how to change mindsets. 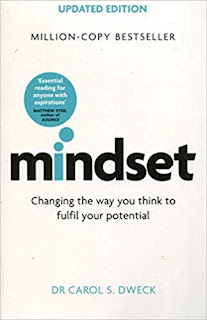 Fixed and growth mindsets
I've reviewed the earlier edition before and it did change my life in many ways. Essentially it is about the two mindsets that govern us and our behavior and how they can either lead us to fulfill our potential or not. The mindsets are fixed mindset and the growth (learning) mindset (and we have both - this book tries to differentiate between them so we consciously adopt the learning mindset). Fixed mindsets are always about proving themselves smart while growth mindset it only about growth and learning. The fundamental idea is that intelligence is not fixed and that with effort we get better. We are not whatever label was attached to us, we can improve and fulfill our potential. If we believe in talent and intelligence as fixed, we defend that idea and there is no growth. If we believe that we can work at things and learn and grow, there is growth.

Success and failure - different for both mindsets
The mindsets even change the meaning of success and failure for us. Fixed mindset believes that failure is not acceptable because it indicates that the person is not talented or intelligent. The fact that on that day, that preparation, perhaps the person was not at the level that the test demanded is not acceptable. So blame, excuse, judgment comes into the picture. Growth mindset, however, treats failure as a challenge and goes back to work harder, to learn more. In many ways, fixed mindset is an egoistic reaction aimed at the outside world (while suffering internally), while the learning mindset is aimed at challenging oneself  (and is quite satisfying).
"You don't fail until you start to blame" - John Wooden.

Effect of Labels
Why we get into these mindsets is because of the praise or positive labels we may have been exposed to which makes us perfect and we feel that anything less than perfection is not acceptable. We defend that idea and become fixed in our mindset. Even negative labels can harm of course, as much as positive labels. The key is to give feedback that is honest, appropriate and in a fashion that it provokes positive action from the student and does not drive them deeper into a sense of failure or inadequacy.

Can we change our mindset?
The good news is that we can change our mindset. We can grow our intelligence with effort. When we try new things our brain grows new connections. So it is better to not opt out or give up when things get harder  - struggle with it until you crack it. Your brain grows in that effort. Ask yourself if there's anything in your past that measured you - a failure, a nasty comment - understand that it doesn't define you or your personality.

Sports and the champion mindset
In sports Dweck says that the idea of natural is a myth - Michael Jordan, Mohammed Ali, Babe Ruth and several others were not naturals - they became champions byt training harder than most. It is the people who understand that every sport is a team sport (support teams) who do well. These are those who had better strategies, taught themselves more, practiced harder and worked through obstacles. The growth mindset sports persons reacted to success (as ding their best, learning and improving) and failure (found setbacks motivating, new information about their limitations, wake up call) differently. Dweck dwells on the importance of character which is what it takes to be a champion - one who goes to the top and stays there. She discusses John Wooden and his coaching style (we may be outscored but we will never lose). He only looked at effort, at character.

Business leadership and mindset
In business Dweck deals with the two mindsets and leaders who adopted these mindsets - Iacocca was one and Welch another. How Iacocca built a great company and then it became all about him and less about others while Welch was all about growing others. Both companies have vastly different outcomes in the long run. The growth mindset leaders listened to others, grew others.

Parents, teachers and coaches
In the chapter on parents Dweck says how every word that the parents say sends a message to the child (judging). Instead of praising their intelligence or talent (which they think as fixed components) you are better off praising process such as effort (which is a variable component). Dweck urges parents to give constructive criticism. She warns against the 'we love you - but on our terms' syndrome and urges teachers and coaches to not lower standards - high standards and a nurturing environment is the key.
She also says that the greatest teachers were those who went to learn, not to teach!

Dweck recommends Twyla Tharp's 'Creative Habit' which she says debunks the idea that art is a natural talent. And of course she cites Betty Edwards and her art classes and her book 'Drawing on the right side of the brain' where after a mere five days one sees a marked difference in sketches. Edwards teaches them that its not about drawing but about seeing - edges, spaces, light, shadows and relationships.

Give your Fixed Mindset a Name
One huge idea in this book is that Dweck urges us to recognise our fixed mindset and give this persona a name. Then its easier to talk about what this persona does without getting personal about it. I do like the idea - it can facilitate many open conversations about oneself.
Clearly she says that the Fixed Mindset persona interferes, sets limitations, is against effort, makes others into judges and not allies. You constantly feel judged.

Brainology workshops
Another new idea is the Brainology workshops that she has developed for youngsters and how they are helping to improve performance. Are the students sleeping enough, eating right, having better study strategies.

Focus on growth every day
Dweck also says one must be constantly seeking opportunities to grow - ask yourself what are the opportunities for growth, what's my plan about when, where and how, acting on plan and maintaining and continuing on the plan.

Glad I read it again. Several ideas are now fusing into other great ideas learning ideas.

Posted by Harimohan at 2:25 PM