'Chase your Dreams' is the young reader's version of Sachin Tendulkar's bio 'Playing it my way'. Since I didn't read the original I thought I'd browse through this version that was lying in Anjali's pile of books. 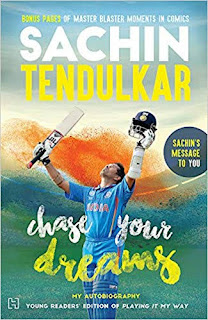 The stories of young Tendulkar's growing up were nice - about how energetic and mischievous he was and how finally when he fell off a mango tree, his older brother Ajit (his eldest brother is Nitin and he has a sister) joins him in a cricket coaching camp. The coach Achrekar rejects him but Ajit pleads his case and asks him to take another look and Sachin makes it and there begins the most famous guru-shishya story we had in Indian cricket. I simply admire what people like Ajit do - putting themselves aside and pleading his brother's case - I feel I can never be as large-hearted as them or be as unselfish as them, and such acts and such people I fully admire.

Mush has been said about the brutal training program Sachin would go through playing throughout the day - practice, natch, practice until evening. With his talent and this kind of work he soon outshone all others and scored some crazy number of runs at school level - 200s and 300s. Most of his career is known to us after he made his debut but even then its fascinating to see how much capacity he had to receive so much love - it swells bigger and bigger and even reading it makes you feel that its too much for one person to handle. But he does and with aplomb.

His stats are incredible.No one would have played the game for so long with all those injuries especially after having achieved so much unless they love the game so much. Its a one of a kind love affair and there;'s no point trying to understand it. The odd discordant note comes in - when he talks of how he recommended certain players as captains (not really required) or when he says he was upset with Dravid for declaring when he was on 194 (he was the captain and he had his ideas, your job was to follow his instructions and not throw tantrums because you missed a double). But then, for all that he achieved, this much is allowed.

The mantra of work, work, work of getting better, of preparation, of being grounded and grateful to the game that gave him so much, to his family and all those who supported him, paid off well. But like all cricket bios - the stats get boring after a while. I realised that we'd like to read what happened behind the scenes, the stories, the evolution. Anyway, off the list.
Posted by Harimohan at 11:13 PM