Went to Tivoli to watch a movie after a long long time. My everlasting memory of Tivoli was watching ABBA the movie in the late seventies or early eighties, early high school days - a movie that introduced me to the world of western music and changed my world. I will always remain grateful to Tivoli for that.

Now there are two Tivoli's - the theatre that was called Lamba has now become Tivoli Extreme. Since Lamba/Tivoli advertised Frozen 2 in a much bigger way I drove there only to be told that screen 1 was behind. So I went there with the two guests of honour - Anjali and Mansi. 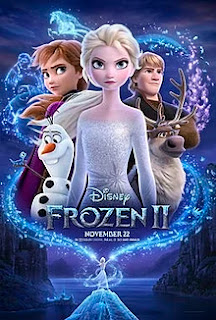 The new thing was that they charged 30 bucks for hiring the glasses. I don't remember going to pay these 30 rupees at the counter - was it part of the ticket or was it not charged? Anyway, they gave me coupons for the 90 bucks and I handed them over to a Upper guy and not the Lower guy - Tivoli has an Upper and Lower class and if you aren't careful like the couple behind us, you could end up in the wrong class, with the same seat number.

Three other things caught my attention before the movie started. First up, there was an Indian News Review kind of documentary with similar sound and visual, about Sardar Patel and how because of his efforts, the country was united. Again, the documentary does not dwell on how many kingdoms there were (some 546 if I remember right) and how many did not accede easily. It dwells only on two Junagadh and Hyderabad. Following that was an advertisement for some initiative by the Telangana state government that takes care of children of parents who are in jail! The ad shows a couple fighting, the drunk husband beating his wife, the children crying, the wife killing her husband, going to jail, the judge assuring her that the children would be well taken care of. Overall an advertisement that says you can kill your spouse without worries and go to jail - the state will take good care of your kids. So anyone who is hesitating, please go ahead. After all this, they forgot to play the national anthem and we all sat down quietly and guiltily.

The movie was nice with music and stunning visuals. I noticed an Indian name Mohit Kalianpur in the credits - cinematography and lighting. Elsa and Anna and some back story of their parents that now challenges the existence of their kingdom Arendelle. Kristoff, Sven and Olaf the snowman are around and lots of superb visuals later we get to a happy ending. Alla's well and that ends well.

I asked Anjali how she liked it - in my cynical way I didn't much like it - but she rolled her eyes and said 'very good'. Mansi apparently felt this was better than Frozen. I immediately changed my mind and upgraded the movie to good. Better not be left behind.
Posted by Harimohan at 10:32 PM