Stillness is the Key - Ryan Holiday

Ryan Holiday makes a case for stillness. He cites so many lovely stories and makes his point. It's a nice fast read with stories about Churchill, Michael Jordan, Tiger Woods etc. 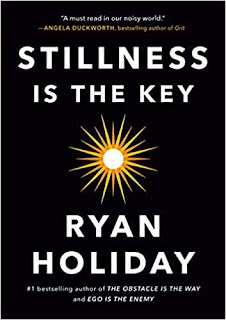 In a nutshell, these are the concepts (and stories) about the Mind, Spirit and the Body

Mind
The domain of the mind (Kennedy's story and how he accessed stillness before he came to a wise decision on the Bay of Pigs incident)
Become present (Marina Abramovic - 79 days of meeting people across the table, YouTube)
Limit your inputs (Napolean would delay all good news and inconsequential stuff, only bad news to be told immediately)
Empty the mind (Baseball player Shawn Green and the zen mantra of Chop wood, carry water, focus on nothing else but the moment, Sadaharu Oh)
Slow down, think deeply - Fred Rogers show, Mr. Roger's Nighbourhood)
Start journaling - Anne Frank
Cultivate silence - (John Cage's 4'33' minutes of uninterrupted silence)
Seek wisdom - (Socratic method of inquiry)
Find confidence, avoid ego - (David and Goliath)
Let go (Awa Kenzo, the archery master, first taught detachment. He said 'what stands in your way is that you have to much wilful will.' Loosen up to get to a place when there is nothing in the way. Draw back the string until it fell from you bow like a ripe fruit)

Spirit
The domain of the spirit starts with the story of Tiger Woods and how he was troubled spiritually despite the enormous success as a golfer.
Choose virtue
Heal the inner child - (Leonardo da Vinci, being the illegal son, was something he could never get over)
Beware desire - (Kennedy's uncontrollable dalliances, a legacy of his father)
Enough - (Kurt Vonnegut and Joseph Heller's conversation when Heller tells Vonnegut that he had enough. The richest man is the one who is content.)
Bathe in beauty - (Anne Frank who saw beauty outside her window, in the blue sky, nature and the chestnut tree)
Accept a higher power - (AA seeks to surrender, seeks help from a higher source, too much for us to handle by ourselves)
Enter relationships - (the emptiness Johnny Cash faced ina  lonely home and how he went to the airport and wanted a ticket to anywhere but home)
Conquer your anger - (Micheal Jordan's anger ridden speech at the height of his fame, at an award ceremony)
All is one - (Astronaut Edgar Mitchell looked at the earth and realised how we are all one)
What's essential is invisible to the eye he says.

Body
The domain of the body tells us how Winston Churchill wrote 10 million words, 40 books, 500 painted paintings and gave 2300 speeches in a highly productive life. When asked the secret he said it was about conservation of energy.
Say No - (Fabius versus Hannibal when Fabius refused to do anything and let Hannibal tire himself out while he saved his own resources)
Take a walk (best ideas come when walking, Wordsworth thought while walking, memorised and then wrote it down, Kierkegaard walked a lot)
Build a routine - (Fred Rogers, Churchill)
Get rid of your stuff - (Diogenes lived in a barrel)
Seek solitude - (Bill Gates and his Think Week)
Be a human Being (not Doing)
Go to sleep (Zen master Hakuin who slept for weeks on end and then delivered the speech "The Records of Old Sotto", American Apparel owner Don Charney who was sleep-deprived and brought the billion-dollar company down)
Find a hobby - Brtish Prime Minister William Gladstone chopped down trees, Churchill enjoyed laying bricks)
Beware escapism (don't run away from your priorities, novel writer John Fank who was so scared of rejection after one failure, that he whiled his time away reading, golfing and drinking but never wrote)
Act bravely (when the time comes to act, act. Like the French philosopher Anne Dufourmantelle who died in 2017, rushing into water trying to save two boys from drowning)

Thanks Suresh. Nice read. But to me 'Stillness Speaks' by Eckhart Tolle is still the best because it actually induces a stillness in you as you read it. This book tells you.
Posted by Harimohan at 10:00 AM