Vasu's mother gave this book to me - a beautiful 335 page coffee table photobiography of Telugu superstar Akkineni Nageswara Rao popularly known as ANR. It's a work of love, with many beautiful pictures, analysis from several angles, all towards conveying the life's work of a great artiste. He mentions that Telugu cinema began in 1931 and ANR began his career in 1941 (as a child artiste) and continued acting almost till the end - his last movie 'Manam' was in 2014, the year when he passed away. He always said that he wanted to die acting! That's what Ikigai is I guess - having a reason to get up every day, do it well, and that gives you happiness and is your profession and pays you and is what the world needs. 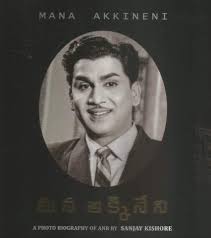 Born into a lower-middle-class family in Venkata Raghavapuram in Gudivada district on September 20, 1924, to Akkineni Venkataratnam and Punnamma, ANR was the youngest of nine children, four of whom died in their childhood. His father passed away immediately upon his birth. He was given five acres as his share.

ANR showed his prowess as an actor early in school drams where he played Narada and Chandramati to accolades. His brother Ramabrahmam went out of his way to promote his younger brother and got his enrolled in a drama company called Kuduravalli Drama Company. It is fascinating to see how these drama companies flourished even then. ANR would play the role of 'Tara' a female character so well that many were shocked to know that it was a boy who was playing it. He was always diligent and worked 18 hour days - working at home, with the cattle, fetching water, going to school which was 3 kms away, doing housework, helping his mother and then going for rehearsals till late in the night. The 10000 hour theory will work well here.

Ramabrahmam tried his best to get his brother a break in films and finally got him a role in the movie 'Talli Prema'. Though ANR spent four months in Madras working on the film, his role was finally chopped off and he returned. As fate would have it he was spotted on the Gudivada Railway station with his drama company by a film producer Ghantasala Balamurali and he offered him a lead role in his upcoming film 'Seetarama jananam'. ANR was to play Lord Rama. The film didn't do very well but he got noticed and he was offered films like 'Mayalokam', 'Mugguru Marathilu', 'Ratnamala' and 'Balaraju' all of which did well. Balaraju was a big hit. ANR went on to do several hits in his 75 year long career including Devadasu, Premabhishekam, Gundamma Katha and others. He starred in 255 films in Telugu, Tamil and Hindi. He did TV serials, sang songs and turned producer too. He was a shrewd businessman who invested his money well and established flour mills, model farms, grape gardens and most famously the Annapurna Studios in Hyderabad. He started the ANR Foundation, contributed to charitable causes. He also authored five books, mostly autobiographical. He was awarded the Padma Shri in 1968, Padma Bhushan in 1988 and Padma Vibhushan in 2011. He was awarded the Dadasaheb Phalke award in 1991. He was also awarded four doctorates by Andra University, Nagarjuna University, GITAM and Dakshina Bharat Hindi Prachar Sabha.

ANR named all his enterprises after his wife Annapurna to whom he remained eternally grateful. His family continues his legacy. His children include Satyavati, Venkatnarayana, Nagasuseela, Naga Saroja and Nagarjuna. Wonderful coffee table book and a great effort by  Sanjay Kishore.
Posted by Harimohan at 4:09 PM