Daniel Kahneman is a senior scholar at Princeton University and won the Nobel Prize for Economics in 2002. So that sets the book up. He starts by explaining how we have two systems - a system 1 that seems to operate on auto mode with no effort and no control (reading billboards, understanding simple sentences, 2+2) and system 2 which allocates attention to effortful method activities including complex computations (telephone numbers, parking in narrow spaces, filling tax forms). He talks about how we sometimes think fast instead of slow and mess up our decisions and do things when the obvious is staring us in the face. This could happen because of a number of biases to which he make us familiar in this 407-page long book. 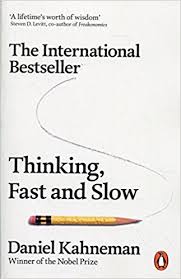 Cognitive illusions are illusions of Sys 1 response where we react before it happens. We must slow down and let Sys 2 take control. He gives many wonderful examples and cites the invisible gorilla experiment, add 1 task experiment, how we react under time pressure etc - all pupil dilating tasks as he says, tasks requiring mental effort. the good news to all of us is that we tend to think as little as possible and follow the law of least effort. But then there are times when we focus so much - like when someone forgets a meeting not because they forgot but because they were immersed in what they were doing. He refers a lot to flow activities here. Kahneman warns that Sys1 has a tendency to take over - need to check for Sys 2 memory deliberately.

Self-control and cognitive effort are signs of mental effort. He cites several experiments to prove his points - Walter Mischel's experiment with 4-year-olds and Oreo biscuits is one. He says that self-control is higher with higher intelligence. Many times one does Sys 1 things because they are tired as well so one must watch out for those biases. People who say what comes to their mind seem to have trouble delaying gratification.

Biases due to association, Priming, honesty bias (coffee banners experiment). Sometimes Sys 1 makes up a story and Sys 2 believes it. Works positively and negatively - you can smile and feel better or frown and feel worse. In cognitive ease, he makes the point that a little difficulty is actually good for better performance (like driving on a bad road will improve concentration).

Then there are people who cannot accept that things just went wrong. They need a causal story. They always have someone else to blame - someone who sabotaged their activity. Or those who jump to conclusions based on a confirmation bias, or a halo effect. He has a  term WYSIAtI (What you see is all there is) which can lead to overconfidence, framing effect, base rate neglect. All leading of course to errors in judgment. Less information is better.

The part about how judgments happen and how we match intensity - of cause and effect - which could again cause an error in judgment. We are tuned to answer the easier question when given two choices. In the law of small numbers, he says that we can be misled into assuming a pattern where none exists because the sample is too small. Anchoring helps in negotiations and he says one can clearly reject the anchoring number.

In the availability heuristic, one substitutes one question for another. If there are more number of attributes to list, less attractive it is. Lets say a CEO has several successes recently  - the availability bias could make her overconfident.

And so many more like that. Like someone wrote on the cover of the book - Buy fast, read slowly. (There is no other way one can read it anyway.) One good thing is that by the end of it, I started getting a few right. Some sys 2 seems to have started kicking in.

Wonderful book. Thanks Satish.
Posted by Harimohan at 10:01 PM