Bruno is a small boy growing up in Berlin. He lives with his Hopeless Case sister, his Commandant father and mother. His boss's big boss is the Fury. One fine day the family shifts to a place called Out With. It is a drab place, with a high fence on one side and no other civilization close by. Across the fence live some people. Alone on this side of the fence, Bruno wants his old friends back but his father says they may not be moving back for a long time. 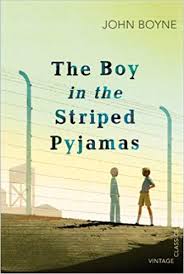 The place has nothing but soldiers. Bruno decides to explore the place one day and at some distance from his house, finds a thin boy in striped pyjamas across the fence. His name is Shmuel. They strike up a conversation. Bruno gives his new found friend some food and he gobbles it up. Something warns him not to tell his family about Shmuel and the others on the other side. Their friendship grows until there comes a time when his father decides that maybe they should move back to Berlin. On his last day at Out With, Bruno decides to visit Shmuel's home and help him find his father.

Boyne does a brilliant job of telling the World War II story through two young friends. Fury and out-With, you can guess who and what they are. Now a feature film.
Posted by Harimohan at 2:02 PM