John Buchan wrote this book in 1915 and it was made into a very popular Hitchcock movie in 1935. It's a spy story and written in a racy, cigarette-dangling hero style. Richard Hannay is the character and he is drawn into a web of espionage by a man who comes to him for help and dies. Buchan wrote five more books (or four) with Hannay as his lead character. Other than the fact that he has no lady loves all through the story where there are several opportunities (Hitchcock set that right in his adaptation) it is all Bond style. 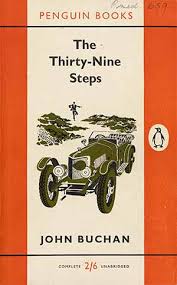 A dead guest who gives information of a possible assassination, some vague clues, a fugitive from the police, chased by the real killers and an edge of the seat climax. Only for Hannay, it's all normal and casual work.

I admire the way they wrote their stories. The style is so racy. And it's so tight that you miss an important part of the action if you aren't paying attention. Now to watch the movie.
Posted by Harimohan at 9:41 AM