Anjali - And She Cooks me a Meal!

My culinary expertise ranges from making tea, toasting bread and making some kind of an ometlette. Beyond that, I tried my hand at making dosa which didn't really work. I can barely manage to get stuff like Maggi noodles and stuff right so I stick to bread and eggs as a safe policy. Once when I was in Mumbai I caused a small episode of food poisoning when I started my culinary journey. I gave up after that and relied heavily on Mony's skills. he made awesome rice, dal and papad which went very well with pickle and some awesome podi he had. 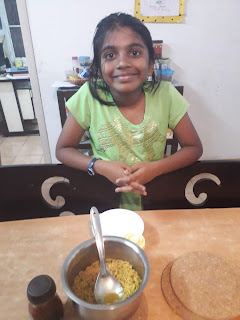 Perhaps noticing the limited menu when we are by ourselves (corn flakes is one great option I give Anjali followed by 'we can go out'), she has now started stocking some ready to make stuff like noodles and pasta. For some reason she likes to hang out at home and eat the experimental stuff I make rather than go out for better options. Like my sister's place for instance. 'Let's make something by ourselves at home,' she says.

So the other evening when we ran out of options and were contemplating dinner, she said 'I can make noodles.' I said I can help. She said she could manage on her own and told me how to make it after reading instructions on the packet. I told her I would join her in 2 minutes which is my standard 'just join time'.

5 minutes later what do I see but this bowl of noodles all done right served up on the table. Madam was all nonchalant about it. How come it turned out so good? The last time we had both attempted it (I made it) it turned out far more drier and we could barely eat it. This was done just right. Maybe she followed the instructions right instead of doubting them like I do.

I was thrilled that my eleven year old has just served me the first meal she has cooked exclusively by herself. And I relished the noodles like nothing else in the world. We polished it off fully. It will remain one of my favorite meals ever. Thanks Anjali.
Posted by Harimohan at 9:42 AM