Every year Daksha School organises a Diwali meal where children and their parents put up stalls - food, games etc to raise money for a good cause and also have a lot of fun. All parents and relatives come and enjoy the mela and contribute to the cause. Anita encourages the kids to participate and she and her crew really help the children and go out of their way to make it a fun event.
The causes change of course - one year it was cyclone relief, last year's funds went to a government school. Anjali usually ran some games etc until last year when she got the idea of a second-hand bookstall. The idea is to collect as many books from friends and relatives that they can donate and sell at discounted prices. The bookstall was a big hit last year. This year after some confusion about bookstall or dance, she and Mansi decided on the bookstall again.
Some 50-60 books were collected (I contributed my own books as well) - Dickens, Enid Blyton, Tinkle, Champak, Balvihar, Herriott, and in the pre-mela sale, they sold off 5k worth of books. In the mela they did a brisk job of selling the rest too - Anjali, Mansi and Brahmani.
Since Anjali was not willing to give up her post at the stall, I went about with Shobhs and then with Ramesh - eating and drinking stuff - pizza, mirchi bajji, onion pakoda, cakes, cookies, lemonade and other stuff. Really good stuff.
I tried my hand at a couple of games - some shooting game and my favorite, cricket in a small room. I watched a fine dance performance by Keertan who did a superb imitation of Michael Jackson on 'Beat it' - his hat covering his eyes, moonwalk and all. 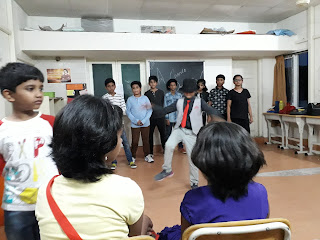 And another group show by the 7th class kids led by their lead dancer Acchi Reddy.  Collected a few stars from the kids and went down to help Anjali wind up.
If what I heard was right, the school collected some 90 k approx. Anjali's bookstall raised 8k. Very good indeed.
As always, great fun. Reminds you of the fetes we used to have those days when we were in school/college. And it was even more fun to see how the kids have grown up - been seeing them for years and now they seem to have become young men and women - even if they are in the 6th and 7th.
Posted by Harimohan at 10:26 PM