Anjali - And a Return Gift from Harsh!

After his sudden move to Mumbai, so sudden that there was not even time for a good bye, Harsh came to visit his friends at Daksha School after almost a full six months. They had gone to Mumbai for their annual summer vacation and things happened rapidly and they never came back. The friends are upset naturally - Anjali more so - and there were times when I would catch her in a despondent mood and she would say 'I am missing Harsh'. They had a good thing going - pitting their minds against each other, pushing one another, both possessing a competitive streak and a lot of fondness for one another. Every once in a while they speak for a long time on the phone catching up. Anjali tells him all the stuff that's going on at their school. 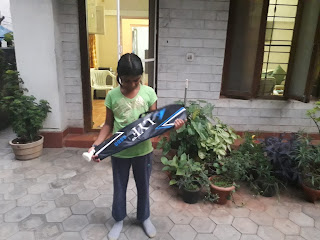 Harsh's immense liking and natural talent for the game of cricket is something we could all see. Anjali gifted him a new bat for his birthday a couple of years ago which was a lovely gift for her friend and one about which I had written in 'This Way Is Easier Dad'. And this time when Harsh came last week to meet them all for the first time, he bought gifts for everyone. 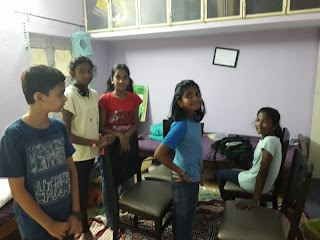 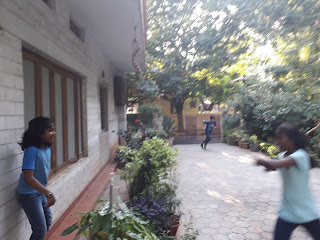 The young kids played their brand of games for a long time that evening. It was nice to see them all together again. I gave Harsh a copy of 'The Men Within'. I am sure he will like it. His mother Vaishali says he hides his copy of 'This Way is Easier Dad' and gives it to no one.

Posted by Harimohan at 9:42 AM