Today we celebrated Baig sir's birthday. He must be well over 80 but has the same passion. He suddenly picked young Sandeep from the Under 12 kids and called him over to the older kids nets. 'Where did he learn to play like that?' he asked. 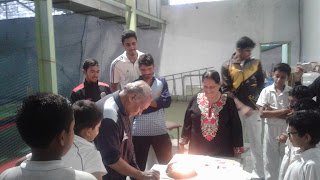 We cut the cake. He called me and gave me the first piece - very touching. All the kids enjoyed the cake, the chips and soft drinks. After Baig sir spoke, I spoke to the kids about what I learned from Baig sir.

I told them how I met Baig sir in 1982 when he came to coach us at All Saints High School. Though it was my first year at school cricket I played state and South zone Under 15 that year entirely thanks to Baig sir's coaching. 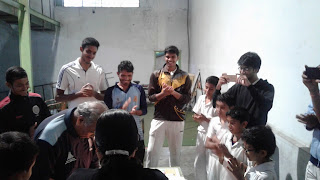 I told the kids that if they want to play higher cricket they have the most experienced coach in India with them. Someone who coached BCCI teams, the Under 19 India team and who had coached Ravi Shastri's famous Under 19 team of which almost 12 played for India later. He had coached over 200 Ranji Trophy players and 40 Test players and has been coaching for 50 years now.

But what sets him apart are these three qualities which I asked the kids to imbibe.

Discipline. I have never seen Baig sir late for a single session in the 35 years I have known him. How much ever I try to beat him, he is ahead of me. Almost the first at the ground. Not rain, not sun, not cold, nothing stops him. He is never shabbily dressed, always immaculately turned out. If they wish to go higher, they could learn this discipline, this punctuality. 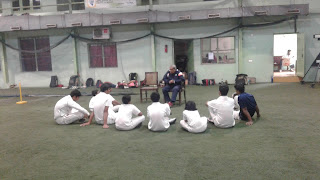 Commitment. Baig sir still coaches well into his 80s and still as vigorously as he used to when I was in school in the 1982s. He will come at 630 int he morning and if he finds the players are showing some interest or the session is interesting, he will put away all thoughts of breakfast and lunch and keep on at the nets. I once saw him coach without a break from 630 to 3 in the afternoon with no breakfast just because he found the boys interest. If I tell him some boy wants to meet him and could he look at the boy, he will come without a second thought. And he is all the time trying to improve the state of the game, every hour, every minute. The nets are his temple and I have seen him on Ramzan's roza days, going through without a break. Even today, when I asked him if we should go out for breakfast he was like 'No, no, Aditya is here. Let me spend time with him. Let him bowl. We will waste half an hour.'

Learning mindset. Baig sir has this incredible capacity to learn. When I teach something in the mental side he listens carefully. He looks at my handouts and studies them. He comes to the workshops I do and sits and listens through them. So keen is his learning mindset that he will learn from anyone - even the youngest member if there is something to learn. He comes up with new techniques every time and does not teach the same old stuff. He improvises them. I have never seen him say 'I know' and shut out knowledge. He is always open.

To the boys then I told them that if they do not apply what he has taught them, they are not progressing beyond the same class. In which case they cannot be taught new things. It is not that he does not know - it is that they are not able to grasp and apply and show enough effort to move past the lesson. So if they wish to play higher grade cricket they are better off applying what he has taught them and getting ready fro newer lessons.

As always, he amazes me. 'The only reason I coach here is because of one man. A great man. My captain M.L. Jaisimha.'

Posted by Harimohan at 7:07 PM

Look forward to meet Baig Sir and you!