It's a 1947 movie set in a jail bubbling over with unrest. A weak warden, a sadistic guard Munsey and an alcoholic philosophical doctor are holding the jail together tenuously. Cell R17, watches their mate Joe Collins return from solitary confinement after being unjustly punished by Munsey. There are orders from above that the warden must control the ship or else. The jail is about to explode. 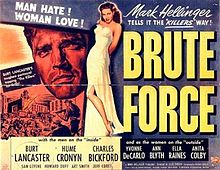 Joe finds the informer who led to his solitary confinement and first arranges an accident which kills the informer. Next he plans a getaway. Meanwhile Munsey threatens another member of Cell R417 and forces him to commit suicide. Pressure mounts on the warden to quit. Munsey's ways get worse. As the inmates prepare for the big getaway, there is another leak. Munsey is waiting. Warden is sacked. Another inmate is beaten by Munsey to death. Joe is set on his path despite all warning.

There is a dialogue by the doctor who speaks his mind against Munsey and gets beaten up, perhaps in his drunken stupor. 'Not imagination. Not compassion (or something to that effect) Just brute force. Yes, brute force does make leaders it seems (he speaks with such contempt here). But remember, it also destroys.'.

The doctor always advocates softer measures against the inmates. In the end brute force meets brute force and claims many lives on both sides. The inmates of cell R17 share their stories - all of them are there for their women. They have a picture of a lady who is every man's woman.

Angry. Violent. Made with all the idealism and innocence of 1947. Burt Lancaster looms large as Joe Collins. Polishing off the old movies collection. They are the best human interest stories.

Posted by Harimohan at 6:50 PM