This book features in all the lists that children should read but having said that, it is not necessarily for children. It's like 'Alice in Wonderland' a lot but with a lot more punnery and meaning and a map for life. Anjali got this as a gift for her birthday and insisted that I read it too. I am glad I did. 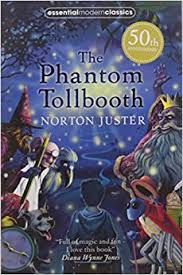 So we have a desultory and disinterested young boy Milo who feels like everything, especially school, is a waste of time. One fine day he gets a surprise present and finds instructions to build the Phantom Tollbooth. He builds it, gets on to his toy car and starts off with a map that is provided to him. It appears that he has to reach the Kingdom of Wisdom which has been split up due to the differences between the two brothers Azaz, King of letters and words and of the city of Dictionopolis, and Mathemagician, King of numbers and of the city of Digitopolis. Due to their quarrels the two princesses Rhyme and Reason have  been banished and the Kingdom is now occupied by the demons of the Mountains of Ignorance. Unless Rhyme and Reason return, the Kingdom of Wisdom is doomed.

Milo starts off by going past a place called Beyond Expectations, reaches a place called Doldrums and then to the Foothills of Confusion. He enters the city of Dictionopolis and meets many strange people there including King Azaz and his cabinet, a spelling bee, the watchdog Tock and a bug called Humbug. Tock and Humbug join him in his quest for Rhyme and Reason. Off they go into the Forest of Sight, meeting Chrome and her musical mornings, past a place called Point of View and another called Illusions and Reality before they jump into a place called Conclusions. Back from the Conclusions they movie into the Valley of Sound and of Silence and finally enter Digitopolis after going past the Numbers Mine where they have to dig for numbers. Finally the heroic trio rescue Rhyme and Reason and the Kingdom of Wisdom is freed from darkness and the demons who inhabit the Mountains of Ignorance.

It's so intelligently crafted and full of wit and good humour and good sense that it needs more than one read (and very carefully). Full of puns and wickedly twisted phrases and situations and people and a whole lot of meaning and good sense. Lovely read. Thanks Anjali and Miskil.
Posted by Harimohan at 7:36 PM