Gotama the Buddha, His Life and Teaching - Vipassana Research Institute

Came across this small book by the Vipassana Research Institute which gave a lot of information about the Buddha and his teachings and the Vipassana course. Gotama the Buddha, (6th century BC) son of King Suddhodhana and Queen Mahamaya was named Siddhartha, one whose aim is accomplished. Siddhartha was called Siddhartha Gotama because his family name was Gotama. At sixteen he married Yashodhara and lived a carefree life until twenty nine. When his son was born he named him Rahula, meaning obstacle, because he felt he was being drawn into bondage. 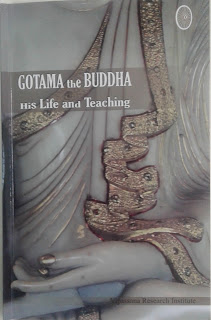 He set out in search of the truth. First he met teachers Alara Klama and Uddaka Ramaputta and learned from them deep absorption concentrations. Then he practiced severe austerities but truth still eluded him. It was only when he sat down with a strong determination to achieve enlightenment that he rediscovered the technique of Vipassana.

Vipassana is to see things as they really are; and not as they appear to be. Practicing vipassana he penetrated the veils of ignorance, delusion and illusion. He discovered the law of cause and effect - if we eradicate cause, there is no effect. By eliminating the cause of suffering one can find liberation from misery, and happiness.

His first two disciples were two merchants from Burma. Then he moved to Sarnath near Varanasi to teach the profound Dhamma. There he taught his five companions who has left him before Bodhgaya and then another fifty four friends of the son of a wealthy merchant. These sixty were then sent to teach the Dhamma in various places. He transformed the ferocious Angulimala who had killed 999 people. He faced opposition throughout his life. He died in his eightieth year.

The Buddha taught the middle path - that seekers of truth must avoid the two extremes of sensual pleasure and of extreme austerity.

The 12 interconnected links in the circular chain of becoming


This process can be stopped by Vipassana meditation.

The Biddha said 'I have shown a step by step extinguishing of mental conditioning.'

Vipassana meditation
Vipassana is the personal purification of the mind - the highest form of awareness, the choiceless observation of things as they are. It spells an end to daydreaming, illusion and fantasy. It is removal of negativities, complexes, knots and habits that block mankind's highest qualities - pure love, compassion, sympathetic joy and equanimity. During Vipassana training the student battles with his own ignorance.

The ten day course is conducted at the course site, from 430 am to 900 pm with breaks and at last 10 hours of meditation. For three days the student develops concentration by observing the inhalation and exhalation of breath, then awareness and then equanimity and finally love and compassion. There is no charge.

The rate of progress of a student depends solely on his previously acquired merits and on the five elements of effort - faith, health, sincerity, energy and wisdom.

There are 84 Vipassana centres in India and 94 centres across the world. I attended one 10 day course. It's effects remain. Recommended.
Posted by Harimohan at 11:30 AM