Spanish. A successful, rich, young businessman is caught by the police on charges of murdering his young mistress. His legal team hires a well known lawyer to fight his case. She meets him ahead of time, citing the introduction of a new witness that could change the line the defence would take. 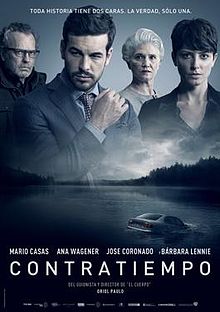 The man tells her how he met his mistress on the sly on the way back from a business meeting. As they drive back they hit a car and find that the driver, a young banker is dead. He goes to dispose of the car and the driver while the girl stays with their own car which does not start. She is helped by a man and that reveals another horrid story.

All clues point to the fact that someone came in to the hotel room and set up the young man. But is that really the case? And if it is not, then how does one get him to confess?

Edge of the seat stuff.
Posted by Harimohan at 5:22 PM