Anjali wanted to see this movie and we booked tickets for her, Mansi, Pooja and yours truly. We reached the theatre slightly late thanks to a great traffic jam for no reason at all. But we caught the emoji Gene, just when he finds out he is a malfunction. 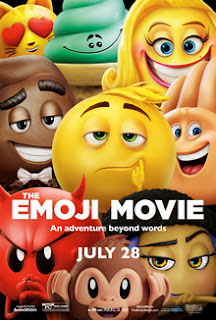 So we enter the city Textopolis which lies in the phone of a teenager Alex. Textopolis houses many apps and several emojis - some star emojis and some flops. Gene is a young emoji born to two meh emojis (apathetic and bored emojis). However Gene has no real character and  expresses many sides to himself which is considered a malfunction by the star emojis. As a malfunctioning emoji he is set upon by bots and would have been deleted had it not been for Hifive, an old out of favour emoji. They find a hacker, Jailbreak, who helps the two. Gene falls in love with Jailbreak and Gene helps Alex fall in love with Addie and all's well that ends well.

The expressions my friend, are getting a little two familiar. And the story lines. It was mildly entertaining for me. But Anjali and Mansi thoroughly enjoyed it. Not surprisingly because the only emoji I use is the smiley - all other emojis on my phone can go and take a hike.

Tickets to the movie 680 bucks, popcorn and nachos 500 bucks, parking 30 bucks. Am I inviting the tax guys home?
Posted by Harimohan at 10:24 PM