Watched the highly acclaimed 'Premam' - the Malayalee movie. It takes us along the loves and travails of young George David who lives in some small town in Kerala and who is propped by his close pals Koya and Shambhu who one feels, are the chief cause for grief in his love life with their expert advise. 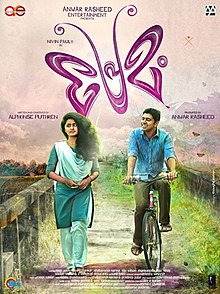 George's love starts in school when he loses his heart to Mary. After a lot of trouble which comes to nothing, George finds that Mary already has a boy friend named George and she in fact asks him to help her George call her from his house. George agrees though he cries out loudly like that kid in Little Manhattan does.

George becomes a young man and acquires a violent and physical edge. He is constantly suspended for bad behavior from college. One day he meets a temporary teacher at his college, Malar, and falls in love with her. Its the same thing once again. Malar seems to like him but in the end has a cousin who takes her away. Malar has an accident and loses her memory and George cannot tell anyone else that he thought she loved him. Malar marries cousin and George cries once again.

Some more years and George is a thirty year old owner of a lovely cafe. A cute girl comes and they get talking. George is once again drawn to her and falls in love and she tells him she is in love with her cousin and is scheduled to marry him. Well things change a bit this time round and it ends happily.

It's shot with a lot of love and care and one gets the feeling that the director probably is telling his own experiences. The actors did a fine job - Nivin Pauly stands out as George. But it does leave a bit of itself inside you and that is more than a movie can ask for. Enjoyed it.
Posted by Harimohan at 11:38 PM