This one is a lovely movie that keeps you on the edge of the seat all through. An honest police cop who prides himself of being on the right side of the law and has little regard for those on the wrong side of the law is in a situation where he s part of a squad out to eliminate a notorious gangster Vedha. The squad eliminates many gang members, including one unknown member with no record. Turns out he is the gangster's brother. 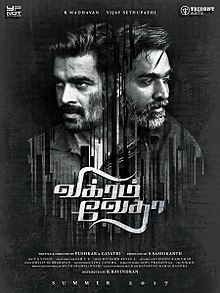 The reticent and normally difficult to trace Vedha comes to the police station and surrenders. He does not reveal anything but to Vikram, the cop, he tells a story with a riddle in the end, and then walks out with an anticipatory bail. The cat and mouse, cop and gangster game continues, and Vedha tells Vikram his life through many stories - often with a moral dilemma. The black and white world of Vikram suddenly turns on his head - his close aide is murdered, he realises he has killed an innocent man, he has been set up against Vedha and he needs to find out who set it all up. Thankfully he has the sharp mind of Vedha helping him and it all culminates into a climax we cannot imagine. Fabulous stuff. Madhavan as Vikram and Vijay Sethupathi as Vedha (Vikram and Vetal) are superb.

Apparently inspired by the Hollywood movie 'Street Kings'.
Posted by Harimohan at 7:02 PM