Shekhar Kammula has an unhurried way of making movies. His movies also flow gently, linearly with minimum conflict. Even in moments of conflict the characters are gentle with one another. 'Fidaa' goes the same way. 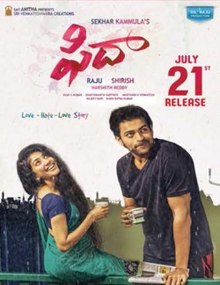 A family of three brothers of varying age groups live together in the US. One is busy working, one is studying for his medicine (Varun - hero) and one is in primary school. The parents are dead (I think) - so the older ones bring the younger one up. The time has come to marry the first fellow off so they find an ad in a matrimonial site of a girl who lives in a small town near Nizamabad. He comes, likes her, needs his young brother's approval, gets it and wants to marry her within a week. The girl has a younger sister who has a sharp tongue and a mind of her own (Sai Pallavi - heroine). The younger siblings get attracted to one another, has a couple of disagreements and in the end get together and live happily ever after. The father of the girls', who perpetually looks like he is waiting to die, survives the movie and well, except for one boy who may have felt let down, all's well and that ends well.

Not the greatest of love stories though it has its moments. If an attempt has been made to showcase Telangana culture, it succeeds partly. They talk the language, show a few customs but I did not get a feel of it beyond that. Sai Pallavi has nice energy and shines above the rest.
Posted by Harimohan at 3:23 PM