Lie Down With the Lions - Ken Follett

After the 'Eye of the Needle' I decided to race through another Follett which was a big folly. Follett takes us to Paris first where we meet an American (CIA, hero) Ellis posing as someone else and who uses a beautiful woman to get access to what he wants - a dangerous network of terrorists. It helps that she is oversexed. But he is in love with her and wants to marry her - only he has to tell her he is a spy, his name is not Ellis and he has used her. This good work is done by the French spy Jean Pierre, who is a spy for the Russians (bad guys, villain). All we need to do now is to create a triangle with Jane in the middle. 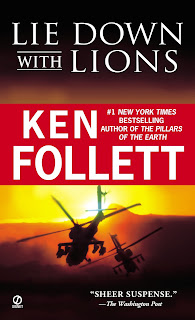 Since Ellis's cover is blown she falls in Jean's arms, marries him and has a quiet child by him. Shift to Afghanistan where the Russians are trying to gain control. Bring America in to interfere and guess who comes to the Valley of Five Lions, Ellis himself. Jane meanwhile has given birth and is constantly buttoning and unbuttoning her shirt to feed the child. She also finds out that Jean has also betrayed her - she somehow specialises in picking spies. Surprisingly she is no spy. Since Jean betrayed her, it is but natural that she sleeps with Ellis. Bring in the Afghan tribes, tough terrain, some land mines, some mullas, some bad Russians (who are very tough but who are worried about blisters) and well, all's well and that ends well. Jane kills Jean who is trying to prevent them from escaping. The child is either unconscious or dead - it only wakes up to feed through all this.

Absolutely trashy and fully written with a film in mind. Boring.
Posted by Harimohan at 3:24 PM