The stories are grim, true to their name - macabre as ever - The Master Huntsman, The Robber Bridegroom, The Devil's Three Golden Hairs, The Six Servants, The Bremen Town Band, Snowwhite and Lazy Harry. I remember the two most popular - Snowwhite and The Bremen Town Band. A gist of what the Brothers Grimm have to offer little children. Princesses and beautiful women are the chief motivators for the heroics by the heroes. 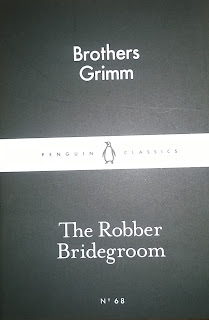 'The Master Huntsman' is a master huntsman! He befriends three giants, kills them, cuts off their tongues, takes the tongues away in his bag to show as prooof to the king and marries the Princess.

'The Robber Bridegroom' is about a murderous robber who wants to marry a  beautiful girl posing as a normal person. He asks her to visit him in the jungle but is warned by strange voices that the house belongs to a bunch of murderers (who are cannibals). She is helped by an old lady to escape. When the robber bridegroom comes to marry her, she her story and the robber is caught and handed over to the authorities.

A prophecy that a fortune child will marry the princess comes true, much to the king's dismay. He tells the fortune child to fetch him three hairs from the devil. Of course the lucky boy goes to the devil's house, meets the devil's mother, who helps him get the three hairs and also the answers to three tricky questions that only the devil can aswer. And then he lives happily ever after.

A bad queeen, a beautiful princess. The queen uses the princess to lure stupid fellows to their death. She gives them impossible tasks and kills them. Cometh hero. Along the way he picks up six servants who can do impossible stuff, a fat man who can grow to 300 times his size, a tall man with similar habits, a fellow who can hear anythng, a fellow with powerful eyes, a fellow ho gets hot when cold and who gets cold when hot and vice versa and one who can see beyond mountains etc. With these six weird servants he goes, meets the queen, accomplishes her tasks and wins the princess's hand.

A donkey realises the farmer wants to get rid of him and planS to run away to Bremen to join the town band. On the way he meets a dog, a cat, and a cock. The four happen on a robber's den , scare them with their singing, feast on their food and finally maul one of them enough to make them never come back to their place again.

Snowwhite and the seven dwarfs, and the evil queen, and the mirror, and the poisoned apple, and the prince, what drama and what imagination.

Then comes Lazy Harry, who is unhappy with his work and who marries Fat Katie hoping she will do his work. Fat Katie is lazier, gets rid of the goats and comes up with a scheme to earn money by collecting honey. They do nothing, fantasise about riches, lose the honey and think up more lazy excuses to stay in bed.