It's a quirky movie with a quirky sense of humor. So if you don't have a sense of humor you are likely to miss a whole lot of stuff. If you are a person with rigid rights and wrongs, then perhaps again, you might be seething at the 'wrongs'.But one thing is for sure, the more I watch this movie the more I like it. Perhaps it's because I really enjoying watching the phenomenal screen presence of young Santosh Shobhan who breezes through a difficult role with an ease that highly accomplished actors would have struggled with. Santosh stands out head and shoulders over all others and pretty much carries the film on his shoulders - be it in his intense anger, duplicity, fickle temperament or even his love. He is supported by a bunch of quirkier characters like his friend Naresh, Sreekanth, Sarveshwar Rao and his wife, the waiter. I especially loved Kamesh the boss, and loved it even more when Santosh imitates him in one scene. 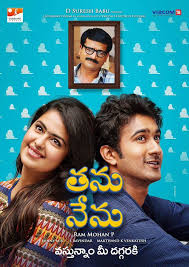 It's a love story at its core. So we have a boy who grew up with his grandmother because his parents left for the USA to make their fortune. They postpone trips to India caught up in their money making. The young boy grows up feeling resentful towards the country that separated him from his parents. He has enough baggage to load a goods train.

He falls in love with a girl. But he finds out later that she has promised her father that she would go to the US to fulfil his (the father's) dream. Of course he does not want her to go and does everything his unconventional mind can think of to prevent her from going - from shady touts who can influence rejection of visas to trying to mislead her away from her interview - he does everything and fails. But her father and the one person who also wants to marry her, 'caste feeling Srikanth' put some spokes. Not that Kiran needs any spokes. He is fully capable of putting enough spokes in his own life.

How he unravels himself, helped by his love, is the story.

The story is also about all those things that we are comfortable with in private - be it NRI or US bashing, socks- t shirts-shoes gifts syndrome, caste feelings, our attitudes to BPO jobs, priests and pujaris, to death, love - we have said it all or seen it all. But as the hero Kiran says to his future father-in-law - it's the truth. It' what we do but do not want to acknowledge or say in public. So we don't know if we should laugh along with the characters when they laugh at the bashing of a US based Telugu client or at 'caste feeling' jokes - because we don't know if its politically correct.

In many ways 'Thanu Nenu' under its facade of fun and humor deals starkly and honestly with our hypocrisy and our inability to face the truth. So if a senior reviewer feels that the brahmin priest in the movie (portrayed brilliantly by new comer Ram Subbu) was showed in bad light one must wonder - should all brahmin priests only be shown as grave, old, wise, knowledgeable people with no desires - especially when we know it's not always true. It's the popular image but reality is that there are brahmin priests of all types - including this very likeable young and handsome priest who takes care of his body and builds his six packs, who watches movies and has other likes and dislikes in life. But he does his job better than most grave, wise, old, knowledgeable priests might have done in similar circs by giving solace and love to the young distraught boy. What is it that we do not want to see? Why do new patterns threaten us so?

This is what 'Thanu Nenu' shows. That is also why I am glad Ram made this movie and not some sentimental hogwash about school kid romances that caters to all things unintelligent and lazy. This is honest, has integrity and like the hero says in a call F... you. Take it or leave it but this is what you get. Good for you Ram.

Anyway, parents, work, love all go through a roller coaster and finally come close into a happy resolution. Santosh shines through brilliantly. Someone next to me said - this guy could be the next Mahesh Babu. And some. If there is one reason to see this film, you could do it for him. Whether he says 'I love you' in the most convincing way I have seen anyone do, or pull off an insanely crazy puja scene praying for someone's death, or even pull off a LOL, LOL, LOL caper, or for a moment become the unhinged bipolar character with his mood swings - he is simply outstanding and highly likeable. Just shows how much difference a talented artist can make.

I was most interested in Ram's directorial debut and I genuinely think he acquit ed himself well. It's a difficult theme to choose because the movie is unapologetic and goes after all that the quirky characters feel - be it US and NRI bashing, caste feeling, craze for foreign stuff, lost priorities - it says it like it is without sugar coating anything and yet making it funny. Comedy of this type is the hardest to pull off because when you read that on paper you wonder - how will it come out on screen if you have a bad actor who does not get it? Every single one of those close calls could go over the line but to Ram's credit he managed to keep it under, make it fun and entertaining and certainly threw up a phenomenal talent like Santosh yet again.

Not to forget the exciting directorial talent Ram brings to the industry now - there's no writing him off because he has done enough in this difficult movie. He can absolutely breeze through with a script with a bit more meat and more resources. Ram is here to stay and will certainly direct movies that will provoke, entertain and disrupt. More importantly, in both Santosh's work and Ram's, I can see an intelligence I always hoped to see in the craft. Bodes well for the industry - I can predict some great movies coming out in the next decade.