Woody Allen in London is dark and melancholic. 'Cassandra's Dream' is in England, perhaps London. Two brothers, one Ian (Ewan Mcgregor) who has plans of making the good life and the other a mechanic Terry (Colin Farrell) who is addicted to dog races, buy a boat (on dog race winnings) and name it Cassandra's Dream (name of winning dog). 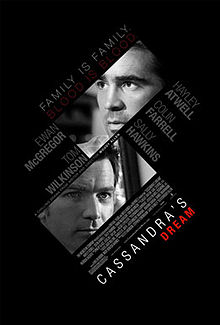 Ian falls in love with an actress and the couple thinks of moving to America while Terry who is happy with his lot in life, picks up debts on his racing addiction. Their chief benefactor, Uncle Howard steps in and offers to help provided they murder his business associate. They do, mainly pushed by the ambitious Ian. Terry is consumed by guilt after the act and wants to confess. Uncle Howard and Ian decide to get rid of Terry and as usual Uncle Howard does a good job of convincing Ian to do his dirty work. While on the boat, Ian, who plans to poison his brother, realises he cannot and in a scuffle with Terry is killed. Terry kills himself. All's well and that ends well.

Not for me. Very short storyish.
Posted by Harimohan at 2:33 PM