Meeting Sudha Varde, 79 year old, 23 schools, a difference to 1000s of people, an inspiration to me 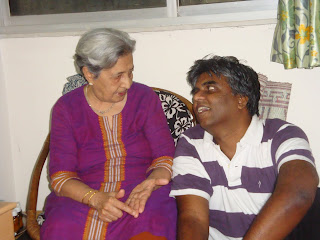 Sudha Varde and I
In Mumbai for Rajan Bala’s book launch tomorrow and I bumped into seventy nine year old Sudha Varde. The moment I set my eyes on her as I entered Suhita’s house I realized that she was an engrossing lady of exquisite charm and an easy grace that comes only with someone who has a secret mission and is well and truly engaged in it. In her eyes there is a mysterious smile, in her demeanour there is a soft peace and in her every act there is a definite purpose. Suhita introduced me to her, “she was with Rashtra Seva Dal for a lifetime and Mom’s best friend”. I asked her all about RSD and what she did.

What she told me in the next one hour made me want to stand up and dance. Here was an inspiring story of someone giving an entire lifetime of work and thought for upliftment of children, youth and women in Maharashtra, Gujarat and Bihar, unconditionally, for over a lifetime. 23 schools have been established in far flung places now with her dedicated band of workers and she says with a wry smile that she wants to see 20 schools done in Bihar before her time. Twenty five I say, and she smiles. I know she will do it, and more importantly she knows!

How did this lifetime romance with the RSD and such wonderfully dedicated work to society start I asked her? In 1942 she says, when she was a student of King George High School, Mumbai. School was shut for the 1942 freedom struggle and as an 11year old impressionable youngster she remembers seeing huge, ungainly and monstrous tanks and Brit soldiers with guns patrolling - a disturbing sight for a young 11 year old girl. Troubled as she was, she remembers a big rally addressed by Achyuth Patwardhan, a senior leader of the RSD on the state of the country, the freedom struggle and how the youth could prepare for it and join the movement. She got hooked on the philosophy of doing something for India at that tender age, and so began the journey of another unsung soldier, another story that reaffirms to me what a thought can do once someone takes ownership for it. ‘I loved dance and I knew I could use it to propagate the message to increase awareness in the youth for the freedom struggle,’ she said. A clear case of using whatever she had and using it to propel her mission of making a difference!

RSD, she explained, was initially the Congress Seva Dal in those years, started in 1935-36, with the thought of promoting a disciplined cadre of youth. Sane Guruji, Achyuth Patwardhan, Shirubhau Limaye, S.M. Joshi were some of the leading lights of RSD which would work towards increasing awareness about the freedom struggle and secularism. It was a move also to dissociate with the much more disciplined yet rightist RSS thought and encourage secularism. Shakhas were established, youth recruited and the movement was vibrant and teeming soon. Mainly centred around Maharashshtra, the RSD movement captured the imagination of the youth through ground activity, games, physical activities, malkhamb, group singing, dance, street plays and other folklore. Vasant Bapat was given the job of writing patriotic songs for the movement. About a 1000 youngsters were in full form. Young Sudha remembers drawing posters and putting them up at school in support of the freedom struggle. ‘I was not part of the fressdom struggle,’ she insisted, eager to correct any misconceptions. ‘If a 12 year old can put up a poster supporting the struggle, that’s the real spirit of participating in the struggle,’ said I. as far as I am concerned, that’s the spirit that the freedom was built on – on small thoughts and acts, that held the big ones.

‘I remember performing dances in those troupes right from my school days – 10 days in Diwali, 7 in Christmas hols and a whole month in summers. Once I remember there was a 25000 contingent of youth assembled in Satara, amidst mountains and hills, a huge gathering and a show for the RSD. People got food from villages in bullock carts.’

As an 17 year old she saw India being granted independence. ‘I was so happy, so hopeful,’ she said, her eyes lighting up. At midnight on August 15, 1947, she was at her shakha, a big ground, near Dadar Tulsi pipe road. There was flag hoisting with her father, mother, and she remembers a small gang of about 15-18 free Indians who went dancing on the road. People were dancing, crackers were bursting. A half an hour celebration,we were in the municipal school.

Mahatma’s assassination brought riots. Shops were looted. Her father, Yashwant Kotwal, got a first aid box, his daughter and started helping out. ‘It was rather scary but I went along and we did what we could,’ she said. ‘Did you have a choice not to help?’ I asked. ‘Yes, but I wanted to,’ she said.

RSD was curbed by Morarjee Desai when India gained freedom, as he perceived it to be leftist. Ground activities were banned. Yet, the movement continued in its own ways, singing and dancing, through its Kala Pathak wing which kept the cultural aspect alive of which she was a big part. Sudha invested all her time and youth into promoting, educating and empowering youth women and children. She remembers using all her resources and time – sometimes her husband’s contacts, her own friends – and everyone chipped in with all they could.

‘What kept me going was that I could make a difference to the ones who did not have’ she smiles softly. Kala Pathak would go to districts, stay for eight or ten days. From 1948 to 1960 around 2000 youth were involved – artists performed free even in ticketed performances. Sudha had camps at her house itself, rehearsals. Till 1966, the movement flourished.

After regionalistic states were formed, Goa was asked to be made part of Maharashtra. She did not identify with the new agenda of Samyutkta Maharahsttra and chose to distance herself with the political agenda. Kala Pathak did a huge pageant ‘Maharashtra Darshan’ in May 1960, showcasing Maharashtrian values and the focus of then movement shifted. Sudha continued the new agenda of Kala Pathak wholeheartedly till 70 until 100 shows were done.
The next move was to move to Indian scape, thought revolution and Indian history. In 1970 the new ‘Bharat Darshan’ came into place. Folk dances of India, puppet style freedom struggle, Usha sukta onwards, history was shown. Emergency shut all this activity down. Typical of Sudha, she promptly involved herself in anti-emergency work.

Sudha detached from RSD cultural activities after that. She continued shakha work. She realized that RSD never recognized women as a separate entity. The Mahila Dakshata Samithi was started by Pramila Dandavathe who invited Sudha Varde into her fold. Sudha started the MDS at her home when she realized that it was a job that RSD had neglected. Women could come and approach them with their problems. ‘I soon realized that these problems were not of those of women but of the family,’ she said.

In 1993 she was invited back to RSD work for women’s empowerment. Grants were available and there was a focus on women’s development. She developed a workshop for women empowerment on a Tata Grant to RSD and took it to the interiors of Bihar. She designed the workshop with the help of her daughter in law, Sangeeta. Those ten day workshops that she designed of women empowerment were funded by the Tatas with a grant of Rs. 10 lakhs, she said, where 30 women would come and attend, and men would line up to listen. From 1993-95 she did 16 workshops. ‘Ten days,’ I exclaimed, ‘that is a lot. I get tired in three.’
‘You,’ she chided gently, ‘should never say that.’


One incident came up. Post-workshop, one plantation worker, Ahilya Bai, stood up and demanded equal wages. The owner refused. She went on hunger strike. He threatened her. She said she was not going to back off because he could do nothing worse than her condition was in anyway. In full view of the public, in the market place, she was shot dead. Her abandoned body was carried away by the other women and burnt in the forest. The incident was hushed up. No case was booked. When Sudha Varde heard of it she wrote to the NHRC. All hell broke loose. The NHRC reacted. The plantation owner was arrested and sent to jail.
The movement had borne fruit. It was a victory for the women.
Sudha recounts these scenes passionately. Her mouth dries up, she talks so much, so intensely, her thought ahead of her sometimes, her words sometimes getting lost, but never any ambiguity in the message. She recounts the stories with the same big smile, the chirpy attitude and the same burst of energy. You can’t keep her down. She still goes to Purnea where the schools are being set up post Kosi flood destruction a couple of years.
In 1993 she set up a school and a hostel in Osmanabad after the Latur earthquake.
‘I was in Purnea a year ago, and I am planning to go there again, walking in river beds, getting stuck in the slush, being carried by other women or being ferried on bullock carts.
I am going there soon,’ she said.
‘9 schools are there with basic structures, concrete plinths and bamboo structures. Each school has close to 100 students. Right now most are up to 5 th class. One school is under our management because the district collector recognized our work and asked us to manage the school. It is up to 10th class,’ she said proudly. But once someone graduates from our basic school we should go I said. She smiled proudly. ‘So I started counting that’s 11 schools in Bihar, 1 in Mumbai, 10 in Gujarat and1in Osmanabad – 23?’
‘I don’t know if we can call them schools,’ she pondered. ‘they are basic structures with bamboo partitions.’
‘To me if one child is studying under a tree, that’s a school,’ I said.
What makes you go so passionately in your life I asked? My life mission of making a small difference to those who did have what we have she said. And mostly my commitment to the ideals of the RSD which I believed in wholeheartedly and made it my life mission. I asked her what she would advise anyone on how to live their life, for example young Miskil who was around. Sudha Varde, laughed loudly and said, ‘be happy in whatever you do and smile and laugh, and by doing that spread the happiness around you wherever you are all the time. That’s how you must get along in your life, always happy and making the world a happier place.’
A misson, a girl, a lifetime, a thought, a dream, a passion, 23 schools, workshops, hundreds of women, children. Single minded purpose, a zeal for life, being100% in everything, wanting to make the world a better place. What did I learn from her? That you can make a difference if you choose to, by using whatever you know, like she did with her passion for dancing.
I will come to the inauguration of the 25th school Sudha! Let’s go!
Posted by Harimohan at 10:02 PM