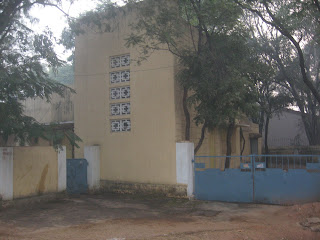 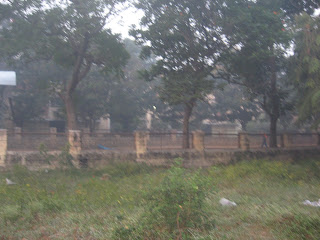 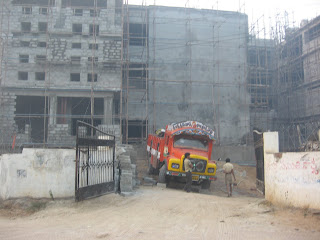 Where's the ground?
As I move towards the most delicious part (which I cannot even wait to begin, it fills me so) - to write about my experiences through the year, I also wish to write about the small things I am doing, changes I am making to grow as a person. One of the things I did was to take a walk in the morning, and yesterday, I decided to make a small change. Instead of walking through the beaten track which for me for several years was a run around KBR, strictly regimented, same route, military precision, show off the sweat and sinew and return. But now it seemed rather pointless so I decided to stroll around in the neighbourhood.
I cannot believe that I had not walked into the ESI hospital compound for almost 20 years now. This is where we grew up playing our childhood cricket matches every Sunday. This is where I got my first six in my ninth class, a huge soaring shot that is still etched in my mind and I wondered how easy it seemed, my first brilliant, left handed catch that got the entire team falling over me, my seven wicket haul, and so many more exploits. This is also the place where our childhood friends Madhav and Vardha lived with their parents (father was the Director of ESI), and Trigger, a huge dog, in a nice quaint bungalow standing beside two others on the edge of a huge ground (where we played). In their house we have memories of wonderful meals, great warmth and love from aunty, can't forget to mention that uncle was very tolerant to all our transgressions, a garage party in our final year engineering days where all the good looking girls came, but suffice to say that enough had happened there to warrant at least an occassional peek.
But I had not. So when I suddenly turned that route, it struck me that there was tremendous activity going on in the ground. To my right were the quarters where the ESI cricket team boys lived - Anil, Sunil, Santosh, Razee, Ganesh, Vishnu - and I swung by to see if there were any familiar faces. None. I came back to the road that led to the ground. There was no ground. Several buildings are coming up there.
I suddenly remembered that old English style house, where a young muslim family lived, apparently of noble blood, which showed in their one foreign car, clothes and behavior. But what was obvious was that they did not have the money for the upkeep. It was a huge mismatch, their appearance and belongings looked aristocratic but the maintenance gave it away even for kids like us. It stood royally, on the highest part of the ground, and we dared not go too close to it.
That is gone now.
The well laid road has buildings both side now. Hostels, offices, Vardha's house still there, thank god for that, and led into a huge sprawling colony that blew my breath away. This was a swamp! What happened? And when? The entire swamp had become a colony for the ESI employees with well laid out roads, quarters, playgrounds etc that I just stopped open mouthed. I asked a man who was sitting there, what the colony was and when it had come up and he looked at me rather weirdly but gave me the details. Obviously it had been built almost 20 years ago.
For 25 years then almost, I had not walked that path, and missed out on what was happening under my nose. One small turn, one moment of not thinking of myself or showing off (of wanting to impress the world by being in the middle), and I would have seen this. I wonder how much more we miss. This was too huge, so itcannot be ignored, but what of the millions of gestures, smiles, waits, friends, family, thoughts, words that we miss because we do not have the space. It is part of the process of growth but it is worth a thought. What if the ground recognised me and said, hey, welcome back, where were you?
My learning for yesterday, reiterates what I have been practising recently, take that little turn and move out of the beaten track - it took me the smallest bit of hesitation to veer into the gate from the main road (you can guess, that was my original plan) and I did it. It opened up a whole new world of fantasy to me. That moment of hesitation, of discomfort, choose the discomfort. You will never regret it. You will grow.
Posted by Harimohan at 4:54 AM