Loss of a mentor - Rajan Bala 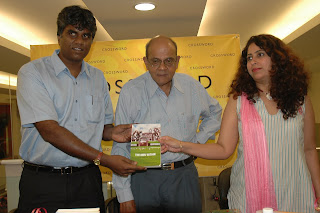 Book launch, Bengaluru 2007 - Me, Mr. Rajan Bala and Ms. Anita Nair
This year I lost two people who I considered would remain my mentors for the rest of my life. Just when I had begun soaking in their vast knowledge and experience, they decided to move on. One was certainly was Rajan Bala, whose unending knowledge, deep insight and sheer experience and contacts in the cricketing world conjured up questions after questions in my mind, ideas upon ideas, gaps and enquiries. For almost a year now, I had planned to spend a week exclusively with him, notebook and pen in hand and learn and ask questions and questions, but it never materialised. One reason why it did not happen was that we kept pegging our meeting to the book launch of 'Days well spent', his last book, that was launched on November 30, 2009 by his family. Another reason was that despite my growing urgency, he had also taken up the TV assignment which kept him rather busy at work unlike his previous assignment.

He had been planning the book launch from June 2009 almost, and I was always asking him 'So when saaab?' (a very irritating question to ask i realize now) because he was obviously not in control of the situation and did not like the delay as well. For some reason he chose to go with Marine Sports which is not a publishing house of any repute and not Rupa which published his earlier books. Finally when it came to print, it was November and despite all his plans to release it on his birthday (November 7) in Bengaluru with Anil Kumble as his chief guest, he unfortunately slipped away into coma and passed away. It was rather unfortunate and very cruel.
Among the things we had planned was a cricket novel where he wanted me to help. I wanted the inside thing (he was very reticent with his information about individuals, even his worst enemies, if he had any, a principle thing) and would never speak ill, just a word that explains the general situation. Wonder if he would have revealed more. But anyway, I was not looking for juice on individuals - I was looking for the general attitude in the dressing room, the frailties and foibles, the characters, the real thing that young, testosterone loaded boys reveal when thrust into the limelight, the sign of power and how they handle it, their insecurities and so on. Oh, we could have spoken to the best in the business, now in their reflective years and it would be a riot. Might still do it by myself but with him around, it would have been wonderful an we would have had a great time doing it.
Apart from that I planned on learning so much from him on the art of writing, learning, teaching, journalism, religion, philosophy, politics - he had clarity - the way he approached many subjects. He hated my guts for posing uncomfortable questions but I think we did drive the story forward.
I miss your wisdom and guiding hand much saab, but you know what, these days I do feel a new energy within me, somewhere I feel you are there prodding my thought along from wherever you are. Thank you saab for believing in me, investing time in me and prodding me on. It took me too long to recognize that when the grandmaster himself has acknowledged you, its time to move on without looking around for more confirmations from others.
Onward then!
Posted by Harimohan at 4:16 AM