A Cricketing Case Study in Progress 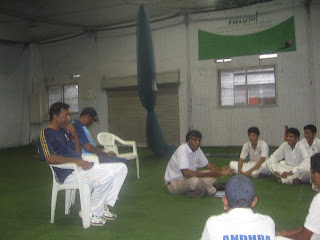 Vidyuth and Ganesh, watching the session 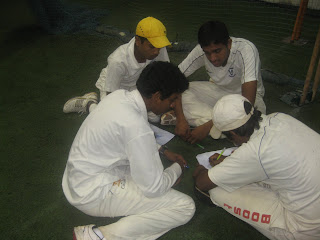 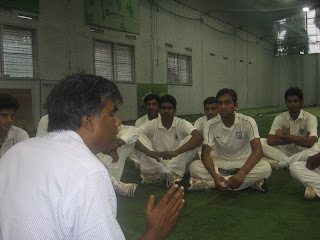 Making of champion teams
My good old friend of over 25 years now, Vidytuh Jaisimha, is a committed coach of the HCA Under-16 team for the past 3-4 years. Vidyuth always has the kids best interests in mind and works tirlessly for that. As a wholehearted supporter of the concepts that 'The Men Within' advocates, he has always calls me to address the team before it leaves for its campaign. The last two years I have had the opportunity of speaking to the team on three or four occassions and was happy that the teams performed well and reached the national stage. I was also happy to note that some of the boys had retained what I had told them in a small, intense 15 minute talk and that too, they retained points of great utility to them. To be a successful cricketer, you defnitely need to have intelligence and they showed it in plenty.
This year I decided to add more value and asked Vidyuth if I could get an hour or so. He agreed though he was realy short of time for practice since the team had only 3 days togther. I had to make his faith count so I designed a quick workshop, made copies of handouts and rushed off.
I sat with the boys and set the basic parameters in place, as to why they were in the team (no answer as usual), how it makes sense for them to perform as a team better so they can pursue their individual goal as well (hmm..yes), how important it was to know their role and to have a goal (makes sense), how their goal should always support the team goal and how they can give their best to achieve both.
We discussed experientially how the best teams are compact and tight like a fist. If one finger lets loose the impact reduces by 50%! The boys agreed after punching their fists (hey, that's true).
The boys listened and accepted that it made sense to all concerned. I then made them into smaller groups and asked them to come up with strategies on how to win the championship and they came up with all wisdom in the world which was good enough to win the championship. If you treat them like intelligent beings they will behave like intelligent beings and surprise you, that is the principle! Once the framework of the campaign was set, I told them that these were the basic principles of management of any project and that they were on scientific ground. Armies use it, companies use it and they can use it as well. The qualities of champion teams were discussed and handouts given to the boys.
I then spoke to the captian and vice captain on basic leadership tenets and how they must view their responsibilities. The youngsters listened intently and took their respective handouts as well.
I designed a handout for the coach as well which asked questions of what he was offering to the boys to keep them together as a unit, as individuals with goals etc.
Throughout the tour Vidyuth and I have been in constant touch, devising games, exercises etc for the boys so they are constantly thinking about the game, their best performances, how to get better, analysing one another etc. The performance has been good, no I am being harsh, outstanding in some, and we are one point below Tamil Nadu as we take on Karnataka today. Some performances really were magnificient so far and made the heart leap. I know the boys had grown in character just by being part of that campaign whichis so important.
I am looking forward to meet them before they head out to the national campaign in the next stage and raise the level of inputs. It promises o be an interesting casse study becasue in India there is zero input in the attitudinal side and I believe that is almost 50% or more of the game. The mind is never bought into play collectively, it is always individual, and the way things are, there is much mischief that is going on from extenal sources that leaves the kids minds and attitudes confused. Parents, selectors, coaches are all messing them up. A small input that makes sense and the kids pick up so much because they are intelligent and know what is good for them.
Once Vdyuth and the kids return, we should be able to share more on this. I do think I will have a case for attitudinal coaching as a means to improve performance by 30%-50%!
Watch the space!
Posted by Harimohan at 6:04 AM