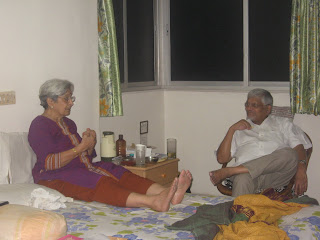 Sudha Varde and Jayant!
I took the opportunity of picking the mind of one of India's quieter screenplay writers. One with a solid body of work including hits like Benaam, Rafoo Chakkar, Ankahee (National award winner 1984), Yeh to kamaal ho gaya, Main Intaquam Loonga, Raaste ka Pathar and several other Hindi, Marathi movies and plays. Jayant Dharmadhikari, my genial and good humored host, and a veritable wealth of information on screenplay writing, someone who worked with some wonderfully creative minds like Amol Palekar, Raj Khosla et al was at hand to share some of his thoughts.
But before we began, Jayant was kind enough to give me a copy of a screenplay he had adapted from a Kannada short story and asked me to read it. I did. It took me two days. It was a beautifully flowing love story of a young Muslim couple and how their lives twist and turn due to some misunderstandings. But, back to screenplay writing now!

Q. What is the basic idea behind good screenplay writing?
Jayant: It should engross the audience visually and draw the viewer into what unfolds before him/her. The viewer must get involved in the subject matter, whatever be the subject, and must be anxious to know how the story will end. At the end of it all, the viewer must feel satisfied that he has seen something good. Ideally, something to think about.

Q. How should I approach it in my mind when I write a screenplay?
Jayant: One must bear in mind that cinema is basically a visual medium supported by audio.

Q. What is the start point or the core of the screenplay?
Jayant: The writer must be very clear about what he wants to tell. Then the characters, situations, songs, dialogues and other things must drive the story around it. You should never move away from the core idea.

Q. How should I structure the screenplay?
Jayant: Like any basic story.It should have a clear beginning, middle and and end.

Q. Should I keep the viewer in mind when I write the screenplay?
Jayant: There are several view points on that. But as far as I am concerned, yes. The basic nature of the viewer must be tapped into. The viewer must identify with the person on screen, feel the victim, and sympathise with him or her.

Q. How about dialogue writing? What should be borne in mind when writing dialogue?
Jayant: Ideally it should be kept to a minimum. Dialogue should support the story.
And when you use other aids such as flashbacks, you must bear in mind that it is an artificial thing for the audience. It should pass information only. Do not try and create emotions out of it how much ever you get tempted.

Q. How do you use music and songs? When should one use this in the screenplay?
Jayant: Music and songs must be used to create and enhance emotions. They should be used to enhance the situation. The key is to make the viewer 'feel' the intensity of the moment. For example I conceived the 'Maar diya jaye ya chod diya jaye' situation in 'Mera gaon mera desh' when Vinod Khanna, who played the dacoit, has Dharmender at his mercy and is about to kill him. Director Raj Khosla was not too happy with the idea of a song at that moment but the music directors Laxmikant Pyarelal saw some potential. There was considerable reluctance but when the line 'Maar diya jaye..' was thrown up, suddenly the whole room went electric. That was a classic moment and remains one in Hindi cinema.

Q. How do I connect the scenes? Should I keep anything in mind while writing scenes?
Jayant: The scenes should flow logically. The 1st scene should lead into the second and the second should lead into the third. Every scene in itself should have a beginning, middle and end, and that scene should flow into the next scene. As the story flows smoothly, the challenge for the screenplay writer is to ensure that the viewer should not be able to predict where it is heading.

Q. Do you use any other aids to enhance the depth of the story?
Jayant: Sometimes to add a layer to the story, we may have to introduce a new character just to set the context or to give a depth to the story. We used the Pathan character in 'Prem Kahani' played by Vinod Khanna which was originally not envisaged. But it turned out to be a good move because that character really connected with the viewer.

Q. Anything else for me to remember when writing screenplay?
Jayant: Remember its a visual medium always. Images move mentally and transform the story scene by scene. The viewer must always have the feeling about how this story will end.

Q. Your biggest learning from all these years of writing?
Jayant: My biggest learning came from Raj Khosla. While working on a movie I came back with a well thought out of scene that moved very logically and flowed easily. He heard me out and said 'It's very nice and logical, but you know, it has no 'ras'. That was the biggest learning for me. It should have that 'ras'. Ras hona chahiye!

Yes sir. Just like life should have! Thanks Jayant for your valuable time and all the learning. Now to write my screenplay I promise I will write one before January 2010!
Watch this space!
Posted by Harimohan at 9:54 AM