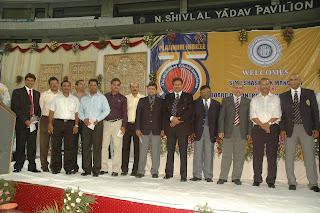 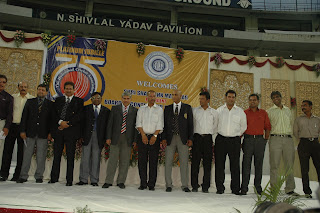 The Hyderabad Cricket Association, on its 75th year platinum jubilee celebrations, decided to felicitate the winners of the 1987 Ranji Trophy team and announced a handsome cash prize of Rs. 3 lakh cash award. The idea was laudable, the money useful. The felicitation was on April 13, 2009 at the Rajiv Gandhi stadium, Uppal and I decided to hitch a ride with Vivek. We were part of that winning campaign - I began as one of the promising young fast bowlers who had had a good first season and was dumped after the second match after which I went off into cricketing oblivion. But thankfully, my colleagues held the baton and won the championship that year, an achievement I am extremely proud of.
The team comprised of 19 of us who played during that season - Narasimha Rao (C), Shivlal Yadav, Arshad Ayub, Abdul Azeem, Vivek Jaisimha, V. Mahohar, Ehtesham Ali Khan, Rajesh Yadav, Venkatpathy Raju, D. Suresh, Vijay Mohan Raj, Ramana Murthy, R.A. Swaroop, Md. Affan, Khalid Abdul Quayyum, Jyoti Shetty, Chetan Joshi, Arun Paul and yours truly.
It was good to meet them all. Not the hug everyone kind of a meet - we barely tolerate each other. Weak suspicious smiles, weaker handshakes, wary eyes. It is a crowd that makes me sick, especially most of th senior lot. The juniors are more tolerable.
Narasimha Rao or Bobjee is now in Ireland working with an NGO - is forgiving and wants a hug. Shivlal is active in the HCA and the BCCI as an office bearer, chewing on his gutkha, nodding perfunctorily, revealing no sign of warmth. Arshad Ayub is an office bearer at the HCA, a Vice President, and also runs various businesses of his, and he is definitely not wasting his warmth and time on people who don't count. Abdul Azeem was with the ICL and I suspect has retired from SBI, and feels like he does not belong. Vivek Jaisimha runs his real estate ventures in Goa apart from being the match referee with the BCCI - we guys are laughing about with the younger lot and keeping our sanity. Manohar is a bank employee in New Zealand and also coaches and its easy for him to forgive and smile because he has not met anyone for a long time. Rajesh Yadav runs an agency that handles in-stadia advertising and also doubles as match referee, and he is comfortable with things as they are, with people as they are, as he always has been. Venkatpathy Raju is a Vice President at the HCA and also the coach for the Ranji Trophy team, and he is still the same, rushes off with his coterie. D. Suresh is an IAS officer in the Haryana cadre and it was good to spend time with him, just the same, fit and handsome. I had not met him in 20 years, we had gone to the same school and played much cricket together in the junior days with Ehtesham, Venkatpathy, Chetan, Rajesh, Swaroop, Ramana and the others. Vijay Mohan Raj, Tony, is a coach and runs his travel agency, and he is inscrutable as ever and does not waste time on us. Ramana Murthy, Mac, is a superintendent in the excise department, articulate and has opinions and is good to converse. Swaroop is a senior executive with the Maytas group and again rather unsure. Jyoti Shetty is with the Syndicate bank and we really did not have much to talk ever. Arun Paul has done well at the SBI and is a senior officer. Chetan Joshi is with the Railways and also coaches at the HCA and we stood together as we did since our Under 15 days, joking about the rest. Ehtesham is abroad - in a good position in Dubai - in sales. Khalid disappeared, as expected, to Atlanta or some other place. Affan took up religion and was missing in action. My journey is known.
It was a motley crue of young and old, of refined and crude, of naive and criminal, of passionate and weak, and what made this team win the trophy is anyone's guess.
Anyway, we won. It was a fantastic batting performance, and when one looks at the score card it shows some great individual performances.
I remember the first felicitation at the Jubilee Hall in 1987 when NTR was the Chief Minister and he gave us a cheque of Rs. 1011/- and a citation. And now this after so many years.
Thank you HCA. I only wish that the entire thing was conducted better, and done with more grace. We finally never got an invitation, it was almost as if they wanted us to take the cheque and go away. I do wish they'd get these small things right and do things in the spirit of things.
But the good part was meeting all my old colleagues, meeting Asif Iqbal, Abbas Ali Baig, Govind Raj and some other legends.
And the cheque was pretty handy!
Posted by Harimohan at 10:45 PM