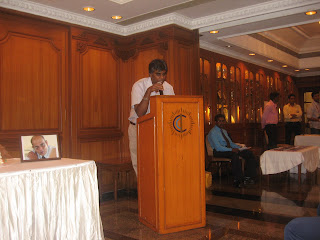 At Rajan Bala saab's memorial!
Since January 25, 2008, when I first delivered a speech that I prepared for almost a week for at the Hyderabad Management Association thanks to my good friend Amar Chegu, I have been speaking of 'Excellence' and how striving for it takes life to a new limit, a new high - apart from giving us a purpose in life and all that we wish for and more. I have just slipped past the 1000 mark in terms of people I have addressed and think it is a landmark worth mentioning and congratulating myself for!
From an audience of 5 to one of 400 young disciplined ITI boys, from travelling faraway seeking an audience to share my views to ganging up the hostel boys at St. John's, Gannavaram to urge them on, from corporate teams that stare at my rantings curiously and disbelievingly to young boys who look on amusedly, it has been well worth it and I promise I shall continue. Anyone who wants to invite me for a talk on 'Excellence - The Key to Achieving Dreams' just has to, and I shall be there.
I always go in with the thought that whether there is one person (I did start one lecture at the Times Foundation with one person in the audience, it grew to 5) or 400, I shall always deliver it the same passion, the same content without holding back an inch. Something I learnt from watching Roger Waters at the Pink Floyd show in Bangalore, sometime in 1999. He just came and gave that performance his all - singing songs he believed in, wrote and sang in early 1970's, stuff that may have changed over the years, to an audience that may or may not connect with his original feelings and thoughts - but there he was, giving it exactly the same amount of energy, passion and conviction. It was sublime. I knew then, that I must do that with whatever I do - that is professionalism,that is excellence (I did not know it then).
Anyway, it's been great. the most satisfying has been speaking to the boys at Boys Town, Hyderabad in Telugu and Hindi, and getting the loudest response from the deaf and dumb boys who got the translation. I found the toughest to be the corporate sector where there is a lot of cynicism and resistance. But then, they teach me the most so thank you for the resistance. If one thought makes a difference somewhere in all this, my job is done.
As for the youngsters, they always amaze me with their intelligence, capacity and potential that I wonder why people don't give them more credit and space and why they don't believe in them some more. They'll knock you down with what they can do if you invest some belief in them!
Meanwhile, well done myself and keep going Hari! Next target, 2000!
Posted by Harimohan at 4:05 AM