The Parable of the Pipeline - Burke Hedges

It's no secret that money has always been compared with water and one of the first big insights I had about money was when I was asked in a workshop to close my eyes and imagine myself standing in front of an ocean and then imagine taking water form the ocean. How would I do that? Some said they would take it in a jug, some said they would use a bucket, some in their palms - I said I will not take and would only take it when I wanted. Of course the right answer is that one could build a pipeline from the ocean because the ocean would not go dry. 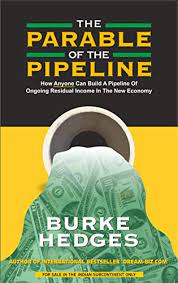 Burke Hedges quotes his father's wisdom to build pipelines and not be bucket carriers. He says more and more people become millionaires to day not by luck or fortune but by learning and following proven strategies for wealth creation. Follow the ones who have made it, copy and act.

The basic idea is built from a story where two young men who wish to become wealthy get a contract to get water from the river. They carry water in buckets and get paid. They are happy that they have money. While one blows up his money and enjoys his life, the other starts building a pipeline by putting in some extra work. Though people make fun of him, over a period he starts making money by delivering water without working while his friend has to work everyday to pay his bills.

Are you a bucket carrier or a pipeline builder? What pipelines are you building? Else you will be stuck with trading your time and effort for money for all your life which could be dangerous because a sudden calamity could wipe away your entire nest egg and you may struggle to survive.

It is not about the size of the bucket either because people who have a big bucket can spend more and end up broke (Like baseball star Darryl Strawberry). On the other hand one Ms McDonnel built a fortune on her 10K pa salary and donated 2 mn when she died.

So you can build a pipeline with some prudence, even with a small income. What it takes is for you to put away some part of your income and create a reservoir of money that will start earning by itself. Let's say you put away between 10-20% of your money and invest that in safe investments and save another 10-20% for the rainy day - you can live within the 60-70% you still have and create a pool that will over time earn money for you.

One must be creative now in using leverage - a pipeline is leverage over buckets. Leverage is when you use your time and money most efficiently so that they earn 10 times or 100 times more even when you are not there to do the work. Businesses, employees, royalties, rents, stocks - they all form some kind of leverage. Think beyond 'I need to do all the work'.

The power of compounding is explained very well through the parable of the king who wanted to reward a wise man who taught him chess. the wise man asked for a grain of rice in the first square, double it in the second, double in the third and so on. The king laughed and said he would do that thinking that a bag of rice would suffice but by the time they reached the end of the first row it was 128 grains and the second row came to 32768 grains. The king stopped the count and asked for a calculation and realised it would amount to 18 million trillion grains of rice. That is the power of compounding. The lesson here is - keep adding a small amount to the pool without breaking the chain or removing from it and it builds to compound in that crazy fashion (think KBC and you get an idea). So a young person of 25 who invests 100 dollars at 25 becomes a millionaire in 40 years, a 35 year old needs to invest 345 dollars a month for 30 years, a 45 year old needs to invest 1557 dollars for 20 years and a 55 year old needs to invest 4759 dollars for 10 years to turn a millionaire. Small amounts over a period of time without removing from the pool.

One of the first and foremost practices one needs to follow is also a spiritual one - take care of yourself first before taking care of others. In terms of money it becomes - pay yourself first from what you earned. Once we put 20% away and have paid yourself first, you can spend the rest on others.

Among other practices are this one from 'Kids and Money' by Michael J Searle where he says kids (or even adults) need three jars to put their income into - The 'Spending and Giving Jar (bills, food, fun), The 'Save' jar (college, house repairs, vacation etc) and the 'Invest' jar (stocks, real estate). These three jars will grow your wealth considerably over a period of time.

Most people end up with assets like a Home which is their most valuable asset. But smart people build in addition to a Home other pipelines like stocks, real estate etc.

Creating a pool of money from small resources to become a millionaire takes about 50 years. Being a millionaire in this context means you have enough where your money is earning for you (not that you are blowing it all away). But one can also look to build a 5 year pipeline by using the daily quota of 1440 minutes wisely and building a pipeline (a business). Use free time productively and creatively and build and leverage your strengths. One classic leverage we ave now is the internet and we can use our relationships to e compound and make a pile of money. I agree that the internet is the ultimate leverage and one can work from that angle to become a millionaire.

I loved the idea of the book and the parable of the pipeline. We must get out of this bucket carrying mentality and start building pipelines. Thanks Raja  for buying this book (we found it in MR Books quite by chance). I will use these techniques and I will also write about them.

Posted by Harimohan at 5:02 PM