This Tuesday I decided to visit Vengal Rao park as part of my artist date. I took Carlos and went around the U turn at GVK and entered the lane. I parked at the first place I saw not knowing that there was ample space inside. Anyway, I asked the tea stall lady if there was an alternate side entrance and not just that imposing one on Road No 1 and she said there was.

I walked ahead - I had come prepared for a walk today in my tracks and entered the park. Nothing about entry charges but there was a guy sitting with a box and I asked him if I needed to buy a ticket. He said yes, ten bucks and then the next guy said no, go in free. I asked again and they waved me in. I went in.

It's a small park with a lake inside (it looks more like a temporary reservoir for the drainage or sewage coming from god knows where and passes downward. I remember one particular monsoon some twenty years ago the lake had filled up so much that it almost came to road level. Crazy. That was before it became a park.

Anyway the path around the lake was good for walking and jogging, not being cemented. However the stench gets you. There was some kind of a trap for the incoming trash and that included slippers, bottles and all sorts of stuff. Some lovers sat at different places - some closeby and some distant. A young lady was busy on her phone, a young jogger ran making me wish I could run like him. I walked.

The more I walked the more disappointed I was. It got progressively worse and then I saw the other side of that huge entrance form Road No 1 - pretty lame on the other side. Just drops down into the park. I walked along and then suddenly the park improved - the part close to the main road. Well kept lawns, paths, swings, steps - and the stench when the wind blew. Kids played, families had fun and some walkers came in after a while.

I liked what I saw though of the lovers who seem to be occupying all the parks. One middle aged couple sat behind the hedge - the lady shy and the man quiet. One couple sat far away near the wall in public view, not attempting to hide anything. A young couple sat close by right near the entrance. One young lady had her head in the lap of her lad on the lawns. One other lass with freshly painted lipstick was waiting for her Lochinvar while her friend had already gone off on a round with hers. By the next round I found her alone checking her phone and by the third, a thin, bearded chap had joined her.  On the other side I saw one fellow with old fashioned Amitabh hair style over his ears, must be forty, and his security guard looking girl friend. The robust pair was busy making out. The last pair I noticed was that of a middle class and middle aged couple having a conversation and trying to appear like all was fine when the whole world could see some serious sexual tension between them. My last exposure to romance here came in the shape of a loud, track suit clad lady who was yelling 'woh moti ko main dekh loongi'. A couple of handsome Irani boys came and waited and in a while two beautiful Irani girls, one dressed in a skirt and one in jeans, along with a chaperone arrived. They set up a picnic spot and I saw a bouquet of flowers and wondered how these people seemed to create a superb event out of nothing while most of my brethren were hiding and moving around hesitantly. I wish I could have clicked their pics but I realise I will get into trouble for that so didn't. 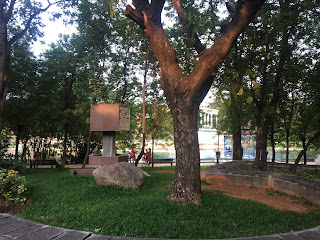 It was Milad un Nabi so there were many Muslim families around enjoying the evening. I walked some nine rounds until my app said I had done my 3.5 miles and I was ready to go. I stretched a bit and then walked out - now they were collecting money from every one. I walked to La Makaan and found that they had sealed off the entry with a rope - like a crime scene. The boy there handed me a chit with 630 written on it. I asked what it was and he said that was my exit time. it gave me 45 minutes to sit there. I always found La Makaan rather difficult, something in its vibes just does not jell with me despite the fact that the previous manager was a good friend. Anyway I asked him if the canteen was open because despite their snooty behavior those guys serve some good egg bondas and stuff. I picked up egg bondas, mirchi bajjis and drank some nimbu paani and then headed back

Posted by Harimohan at 9:59 PM