Perhaps I should have read these when I was younger but in a way I am glad I read it now. Its been lying on the shelf for a couple of years and I decided I must read it. And i did.All 1075 or so pages of it. It's easily the biggest novel I ever read.

The story is about a bunch of industrialists, people who are making things that take the world forward, and their chief opposition, the government that stops them from being super efficient by implementing taxes and imposing curbs. our protagonist is chiefly Dagny Taggart, a lady who is fit to be in that elite group of thinkers, people with minds, and also the Vice President of Taggart Transcontinental, a railway line she is keen on building to make lives easier for the American people. The company is headed by her wimpy brother James, who is indecisive and who sides with the opposition (the government) and is against anything progressive (like Dagny). There is also Hank Rearden of Rearden steel who has made some new alloy of steel that's way out of the league of other steel in the market. Naturally Dagny is drawn to Hank (the name gives him away as a hero). For some reason Hank, despite being the hero character, is strangely hen pecked and humiliated by  his family for sometime in the early parts of the book. 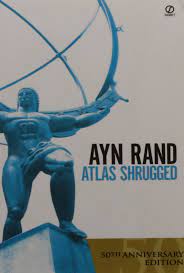 That's not important. There is a character called John Galt who is the one leading the resistance against the system (sadly they are fully outnumbered because the ones with minds and rationality and courage and heroism are less than ten). The story is pretty much how Galt and his gang of brilliant minds drop their great industries and create their own world with their own currency and work in petty jobs,and also make great scientific inventions, but most importantly, stop the world's motor. They say that the world does not deserve people like them and they will go on strike against the world. In the end the system tries to compromise with them and I don't really know how it ends except that perhaps the people realise they have been looted by the looters and go on strike too. Anarchy perhaps reigns.

I have found the characters to be too one dimensional - good or bad, black or white. The heroes are full of themselves and I don't know why. If you're so smart, you should be controlling the system and not the other way around. It's easy to run away but what we want from our heroes is not pages of rhetoric but action that goes towards seizing control, staying on the ground and fighting and delivering what they want to deliver. I found all her heroes rather hollow that way - too much talk and too little action in the right direction. There are some lines that are memorable of course - like the people with minds saying they will not live for any other person and do not expect any other person to live for them etc. I do like the idea of first living for oneself, for profit and not being ashamed of it. That part is bang on and I can imagine myself fully falling for it as a youngster. But now I feel that the heroes could have used their minds better to get their cake and eat it too - to outwit the system and really move the world forward.