My Way - A. Joseph Antony with Jayanti Jaisimha

This was perhaps my first printed word in a book and I must thank Joseph for thinking that I could add in any way to the biography of our Uncle Jai, M.L. Jaisimha. The book was released in 2005 in a glittering launch where Sunil Gavaskar, Azharuddin. Bishen Bedi, Shivlal Yadav and a host of other cricketers landed up. I read my piece and was thrilled to be part of the book and the launch. Now, ten years later, I picked up the book and got a fresh perspective into the man who shaped how we played our cricket and through that, how we dealt with our lives. "My Way' is, of course, Frank Sinatra's song - Uncle Jai would sing like a professional, dance like one, play cricket, tennis, shuttle badminton, billiards like one, apart from looking like a film hero with a baritone that one cannot forget. And there's more.

Tracing Jai's family history from the days as a family honored by the Kings of Vijayanagara Joseph sets the backdrop. Jaisimha's grandfather, Gangadhara Shastri, moved to Bangalore from Motganahalli to get a job as a railway clerk to bring up his large family of six daughters and two sons, the younger of whom, Laxminarsu, was Jaisimha's father. He was also a sharp young man and grew a huge business out of contracts with the Services. So well established was he that his house 'Laxmi Vihar' was the place where dignitaries such as Jawaharlal Nehru, Lord and Lady Mountbatten, Rajendra Prasad, Sarvepalli Radhakrishnan, the Maharaja of Mysore etc were visitors. The senior Jaisimha was a wealthy man undoubtedly. He and his wife, Savitri, had four children - Pratap, Usha, Jaisimha and Indu. They lived in a sprawling estate in Marredpally - cars, servants etc. 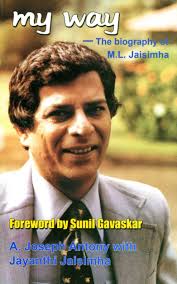 Jaisimha grew up studying in Mahbub Boys High School in Secunderabad. After school he went to Nizam College for his graduation. There he met Jayanthi, or June, as she was known and they fell in love. Jaisimha was a good looking and charming young man who was the sports captain of the college and June was more academically oriented though she teamed up with Jai in shuttle badminton and some other games. Jai was known to be a ladies man, enjoyed his smoke and his drink and a good time, so there were many who warned Junie against the handsome cricketer. But they courted and married and stayed married.

Their romance, a chapter written by Junie aunty is stuff that movies are made of. How Jai would travel back with her in the bus from Nizam College to Secunderabad, where they would sit holding hands, and then walk all the way home (he would give his motorbike to a friend of his to bring home), how he and his friends rode a scooter and a motorbike all the way to Bombay to meet Junie aunty who was returning after a month-long Bharat darshan trip, the way he would bribe her brothers, sister and others when there was no one at home so they could spend time together, the time she visited him in hospital with her friend Bulan when he was down with jaundice, the way he got jealous when Shankar Melkote would be conducting theatre classes with Junie aunty, the way he would send his pals to threaten any who dared tease Junie aunty - one can straightaway imagine Hyderabad in all its glory then.

Jai's friends were an interesting lot - apart from cricketers like Pataudi, his friends included film maker Shyam Benegal. His cricketing exploits are well known so I will not delve into those except that he represented India with distinction and earned many admirers. His biggest admirer is Sunil Gavaskar who named his son Rohan Jai Vishwa after Rohan Kanhai, Jaisimha and Vishwanath. Pranks and mischief galore - including going up on the stage in Dreamland theatre during the interval of a movie and dancing on stage. Uncle Jai was one hell of character - there can never be anyone like him.

It was wonderful reading the book again. if I can find the mail I sent to Joe with my piece I will try and paste that here. Thanks Joe for the memories.
Posted by Harimohan at 12:45 PM